(CNN) -- The civil warfare and social instability in Somalia have prompted the flight of more than 50,000 refugees to neighboring Kenya this year alone, the U.N. refugee agency said Friday. 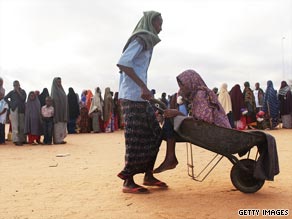 The Dadaab refugee complex is the largest of its kind in the world.

Somalis are arriving at an average rate of 6,400 a month, and their presence has placed pressure on northern Kenya's Dadaab refugee complex -- bursting at the seams with three times the population it was built to hold.

There are more than 281,000 Somali refugees there, and the UNHCR fears that heavy rains in Kenya will lead to flooding at the complex and pose "considerable health risks to the refugees."

The International Organization of Migration has been working with the UNHCR, Kenyan authorities and non-governmental organizations to relocate refugees from Dadaab to the Kakuma camp in the northwestern part of the country.

Somalia has been in turmoil for years. Clashes have raged between pro-government forces and rebel groups such as Al-Shabaab, the Islamist militia with ties to al Qaeda. And this fighting has prompted widespread displacement in the war-wracked nation.

Al-Shabaab has been targeting the most prominent Western-linked entity in the capital, Mogadishu -- the African Union peacekeeping mission, the de facto military force of the weak, transitional Somali government.

Fighting has forced about 250,000 Somalis out of their homes in Mogadishu since May and many of the displaced have sought refuge west of the capital in the Afgooye corridor, the U.N. agency said.

Also, many Somalis have chosen to flee the country by traveling across the Gulf of Aden and the Red Sea to Yemen or the Mediterranean Sea to Europe. Many have drowned or have gone missing in their journey.

All About Somalia • Kenya