GAALKACYO, Somalia (CNN) -- The U.S. government is delaying "tens of millions" of dollars in crucial humanitarian aid over concerns that the money is being diverted to a notorious militant group, a senior U.N. official said. 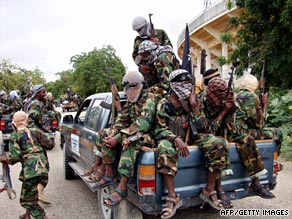 Al-Shabaab militants ride through Mogadishu, Somalia, after a religious gathering in September.

The U.S. government, concerned about the challenges in delivering assistance in a country wracked by civil war, says allegations that Al-Shabaab is stopping aid from reaching the people are under review.

Although one U.S. government source said aid continues to flow to Somalia and hasn't been suspended, another said aid might not reach "some parts of the country" because of Al-Shabaab, the al Qaeda-linked terror group that is trying to overthrow the government.

Located in the Horn of Africa, Somalia has long been a lawless, war-ravaged nation. The United Nations says that nearly half the population is dependent on humanitarian assistance, and one in five children are acutely malnourished.

Somalia has suffered through five consecutive seasons of drought, and the ongoing conflict has caused more than a million people to be displaced.

Kiki Gbeho, head of office for the U.N. Office for the Coordination of Humanitarian Affairs in Somalia, said the United States is reviewing whether its aid helps fund Al-Shabaab.

The U.N. office, in a report issued in September, said the U.S. delay in reaching a decision on humanitarian funding "is already impacting on many agencies and their programmes."

The United Nations estimates that 60 percent of the people it needs to reach with emergency assistance live in areas controlled by Al-Shabaab.

"According to humanitarian principles, we have to serve people and need to deal with those in charge," Gbeho said.

Peter Smerdon, chief spokesman for the World Food Program, the agency responsible for delivering aid to Somalia, would not comment on the U.S. funding controversy but said investigations into whether Al-Shabaab is assisted by U.N. aid assistance are "ongoing."

Food supplies could run out for millions of Somalis in the next few weeks, according to the United Nations. The U.S. government is traditionally the biggest donor for food assistance.

The senior U.S. administration official said that Secretary of State Hillary Clinton and Transitional Federal Government President Sheikh Sharif Sheikh Ahmed discussed in August how the "delivery of services" to the Somali people be broadened.

Clinton said publicly in Nairobi that the United States continues to provide "humanitarian assistance to the Somali people where delivery is feasible and effective."

The administration official said that the aid has never stopped, adding that food bound for the World Food Program in Somalia is on a vessel and should arrive in a few weeks.

The senior administration official said, "We are working with groups there to ensure that we can deliver assistance without having to pay off Al-Shabaab in the process. It does mean that aid may get to certain parts of the country but not others."