(CNN) -- At least 30 people died and 70 were wounded in shelling on a marketplace in the Somali capital of Mogadishu Thursday, according to journalists and emergency services. 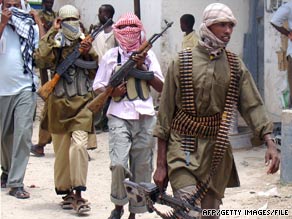 "This was the most brutal shelling," according to an ambulance service representative who said they had picked up 61 wounded, but expect the number to climb. Other victims were being brought to hospitals by family and friends.

The source of the shelling could not immediately be determined.

Journalists saw shell fire coming from AMISOM -- the African Union Mission in Somalia -- strongholds in a fortified district of the capital and from near the airport. AMISOM is the only force in the area believed to have the firepower capable of such an intense attack. However, AMISOM denied any involvement in the incident.

The United States is supporting the Somali government's fight against the insurgents, including providing weapons to government forces. Al-Shaabab is on the U.S. list of terror organizations because of its ties to Osama bin Laden's al Qaeda network.

The United States is concerned that Somalia's weak government could fall to the Islamist insurgency, as it did in 2006 before Ethiopian forces ousted the militants from power in early 2007. Ethiopia invaded Somalia with the support of Somalia's weak transitional government.

All About Somalia • Africa