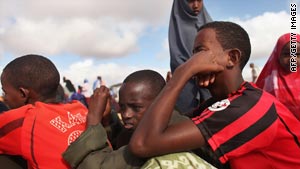 "Recruitment of fighters in refugee camps undermines their very purpose, which is to be a place of refuge from conflict," said Letta Tayler, a researcher with Human Rights Watch, who spent a week interviewing refugees for the group's Thursday report about the practice. "The boys and men who are in these camps risked their lives to flee. Now they're being asked to return to that."

She said allowing recruiters to enlist young refugees in a new force intended to fight on behalf of Somalia's Transitional Federal Government is a violation of U.N. regulations that govern refugee camps.

The Kenyan government, however, rejects charges that it is aiding in Somali military recruitment.

"The government will not allow any recruitment of anyone in Kenya for any activity touching on foreign nations. Neither will recruitment of Kenyans for work in Somalia be allowed," said a statement from government spokesman Alfred Mutua, issued earlier this month."

The Dadaab camps, built to house 90,000 people about 15 years ago, now serve as home to more than 280,000 refugees, mostly from Somalia, forming the largest concentration of refugees in the world, according to Human Rights Watch.

More than 50,000 people have arrived in the camps since January 2009. Many of the newcomers are fleeing a brutal war between Somalia's shaky transitional government and armed opposition groups, including the militant Al Shabaab.

Somali and Kenyan officials who support the transitional government, fear the reach of Al Shabaab could easily spread. The group, which the United States classifies as a terrorist organization, controls large parts of southern Somalia and the capital, Mogadishu. In the past, sources have told CNN that Al Shabaab also recruits fighters in Kenyan refugee camps.

Tayler said the recruits are transported in Kenyan military and government trucks to a state facility near the coastal city of Mombasa for military training.

Initially, Tayler traveled to the Dadaab camps to research the situation within Somalia, since it is nearly impossible to operate in that country these days. But when she arrived, she began hearing persistent reports of military recruitment. She began interviewing people and learned that recruitment was occurring openly at tea stalls and market places.

She said recruiters began circulating in the camps in early October and since then, hundreds of people had been lured with promises of money and claims that the United Nations was backing the new army.

"It's recruitment under false pretenses," Tayler said. "Recruiters play fast and loose with the facts and it's very easy for vulnerable people to want to believe this.

"I was very surprised by the extent of the recruitment," she said.

One 15-year-old boy gave this account to Tayler and her colleagues:

"I had never seen those men around before. They told me they would employ me and give me $600 to be a military man. They told me I would be taken for training inside of Kenya and then taken to Somalia. They said I will be fighting Al Shabaab, who are slaughtering people. I said, 'No, I do not want to do that, I am a student.' I told them if I get an education I can help myself and my family instead of being sent to war and dying. But now I am regretting it -- my father cannot afford the uniform for school and the teacher always chases me from class."

An elderly man told Human Rights Watch that his educated son believed he was joining a U.N. army.

"So I gave him my blessing and he has my total support," the man said.

Tayler said Human Rights Watch wants the Kenyan government and the United Nations to shut down the recruitment efforts.

"We're not saying the Kenyan government should not fear the seepage [of violence]," she said. "But what we're saying is: play by the rules."

Human Rights Watch has documented war crimes and human rights abuses by all sides in the Somali conflict, which has caused thousands of civilian deaths and massive displacement.