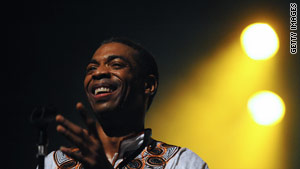 (CNN) -- Energetic, infectious and combative, the music of Nigerian musician Femi Kuti has moved audiences around the world. But the man is just as passionate about getting people to change their world as much as move their feet.

Son of Afrobeat pioneer and political activist Fela Kuti, Femi inherited his father's zeal for both music and activism.

Kuti was signed to Motown Records in 1994 and his music blends Afrobeat with more current soul, R&B and jazz. He's worked with rappers Mos Def and Common and continues to explore his music and collaborations.

While the music matters, the man himself remains just as politically motivated as his father. Kuti's nightclub in Lagos, the New Afrika Shrine, had become a Mecca for West African music and creative expression, until it was closed by the authorities earlier in the summer.

Video: The king of Afrobeat

It was also homage to his father and continued his legacy of using music to inspire, change and motivate.

Kuti recently told a reporter for All Africa Global Media that the Shrine was a place of worship where people can honor "great black people, who fought for the emancipation of Africa through music."

Freeing the "Shrine" from being under lock and key is just one of his crusading missions, as with his band, The Positive Force, Kuti remains outspoken about Nigeria, corruption and the positive changes that Africa can achieve.