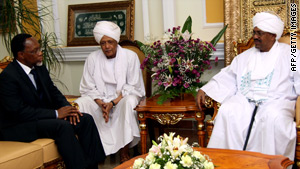 (CNN) -- The human rights group Amnesty International is calling on Nigeria to arrest Sudanese President Omar al-Bashir if he attends an African Union Summit there on Thursday.

Al-Bashir is wanted by the International Criminal Court on charges of war crimes and crimes against humanity relating to a five-year campaign of violence in western Sudan's Darfur region.

And Nigeria, as party to the treaty that created the criminal court, is obliged to cooperate, Amnesty said.

Nigerian officials could not immediately be reached for comment.

"The Nigerian government has an unconditional legal obligation to arrest President Omar al-Bashir and hand him over to the ICC, should he enter Nigerian territory," the group said. "Any failure to fulfill obligations under international law and may amount to obstruction of justice."

The International Criminal Court issued the warrant against al-Bashir in March. It was the first ever issued for a sitting head of state by the world's only permanent war crimes tribunal, based at The Hague in the Netherlands.

The warrant covers five counts of crimes against humanity, including murder, extermination, forcible transfer, torture and rape. It also includes two charges of war crimes for intentionally directing attacks against civilians and for pillaging.

Al-Bashir remains president and has traveled to several countries since the warrant was issued.

The violence in Darfur erupted in 2003 after rebels began an uprising against the Sudanese government. To counter the rebels, Sudanese authorities armed and cooperated with Arab militias that went from village to village in Darfur, killing, torturing and raping residents, according to the United Nations, Western governments and human rights organizations.

Eighteen heads of state are slated to attend the summit, at which ex-South African President Thabo Mbeki is expected to submit a report on the situation in Darfur.