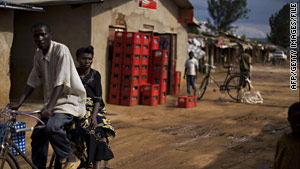 (CNN) -- Refugees at a settlement in southwestern Uganda have barricaded all roads into the camp to protest a food-aid disruption they say has caused the deaths of several children, refugee leaders said Tuesday.

"We have spent three months without any food supplies from government nor from any food relief or humanitarian agency," Congolese refugee leader Serugendo Sekalinda said by telephone.

The protest began Tuesday after the deaths of three children Monday night, refugees said. Those were the latest of dozens of children who have died in the past two weeks due to hunger, refugee leaders said.

But Needa Jehu Hoyah, a spokeswoman for the United Nations refugee agency, known as the UNHCR, told CNN by telephone from the Ugandan capital, Kampala, that no children have died in the Nakivale settlement, which has tens of thousands of refugees.

"We have a malnutrition program [in Nakivale] for children, [but] no children have died of hunger there," she said.

The UNHCR, along with the U.N.'s World Food Program and the Ugandan government, will deliver a food shipment to the settlement Wednesday, Hoyah said.

Uganda's disaster preparedness and refugees minister, professor Tarsis Kabwejyere, told CNN that the refugees living in that camp -- most of whom fled fighting in the Democratic Republic of Congo -- would have their full rations Wednesday. For a time they've been getting half rations, he said.

"By tomorrow there will be no food crisis at that settlement," Kabwejyere said. "We do our best to make sure humanity survives, even in the hardships in refugee settlements, so people have a reasonable existence."

The food shortage came about as a result of a disruption in the food supply chain and a shortage of money for food, the minister said.

Hoyah agreed that there "were issues with the food pipeline."

Protesters at the Nakivale settlement, about 400 kilometers (248 miles) southwest of Kampala and 6 kilometers (3.7 miles) north of the Ugandan border with Tanzania, gathered at the homes where the most recent deaths of children have occurred, Sekalinda said.

"We are demanding to be relocated to another country where we can be protected from death caused by hunger," he said.

While the settlement's population is composed mainly of refugees from the Democratic Republic of Congo, it also houses refugees from conflicts in Rwanda, Ethiopia, Somalia, Eritrea and Kenya. Nakivale is the largest and oldest of the five refugee settlements in Uganda, having opened more than two decades ago.

People living there are provided small plots of land on which to grow crops, and they often build huts made of mud, water and thatched grass.

As many as 155,000 refugees live in all the camps in Uganda, according to the UNHCR. As of January of this year, there were also an estimated 853,000 internally displaced persons, or IDPs, the UNHCR says on its Web site.

The IDPs were forced from their villages in the past decade by attacks from the Lord's Resistance Army, which wants to create a democratic government in Uganda based on the Bible's Ten Commandments.

Last week, an African Union summit in Kampala endorsed a declaration to end the forceful displacement of people in all of Africa.

Delegates to the poorly attended summit also pledged to aid refugees and IDPs by training them in vocational skills so they could find work during and after their forced displacement.

Journalist Samson Ntale in Kampala, Uganda, contributed to this report