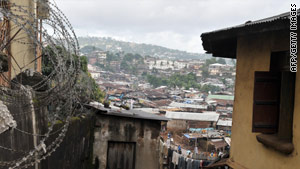 The U.S. Peace Corps will return to Freetown, Sierra Leone, after a 15-year absence.
STORY HIGHLIGHTS

"We are delighted that the government of Sierra Leone has invited Peace Corps volunteers to return and work shoulder to shoulder with the people of Sierra Leone," Peace Corps Director Aaron S. Williams said in the news release. "The partnership between Peace Corps and Sierra Leone was established in the era of President Kennedy and it is an honor and a privilege for us to have the opportunity to work with the communities of Sierra Leone once again."

The first group of about 40 volunteers is to arrive in June. They are to focus on work in schools and on community development.

Since 1962, more than 3,400 Americans have served as Peace Corps volunteers in Sierra Leone.

The organizationhas 7,671 volunteers working in 75 countries. Their activities have been suspended in Madagascar, Mauritania, Guinea and Bolivia.