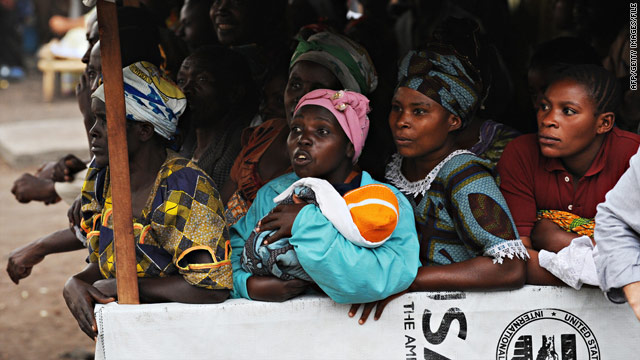 Conflict in the Democratic Republic of the Congo has left many civilians displaced, such as these refugees in August near Goma.
STORY HIGHLIGHTS
RELATED TOPICS

United Nations (CNN) -- The United Nations has suspended assistance to a Congolese army brigade battling rebels amid allegations that its troops killed 62 civilians, including women and children, between May and September.

The U.N. director of peacekeeping, Alain Le Roy, announced the move in an interview Sunday with Democratic Republic of Congo-based Radio Okapi.

The killings allegedly occurred near Lukweti -- a village in North Kivu province in eastern Congo -- about 60 miles (100 kilometers) northwest of the regional capital, Goma.

The U.N. mission in the Democratic Republic of the Congo -- known by its French acronym MONUC -- has been providing logistical and operational support to Congolese troops since May as they battle Rwandan Hutu rebel groups in the easternmost provinces of the war-torn nation.

The support includes medical evacuations, resupply of materiel and transport.

The suspension of support comes in the early stages of a joint Congo-MONUC investigation into alleged abuses by Congolese army troops.

Two weeks ago, the U.N. special rapporteur on extrajudicial executions, Philip Alston, said that at least 1,000 civilians had been killed this year in eastern Congo. He called the human rights situation there "catastrophic."

One of the most brutal attacks occurred in April, Alston said, when Congolese troops attacked the Shalio refugee camp in the North Kivu district, allegedly killing 50 civilians and abducting and gang-raping 40 women. Some of the surviving women reportedly returned with chunks of their breasts chopped off.

Alston said that continued U.N. support for factions of the Congolese army engaging in human rights abuses should be considered "complicity" by the United Nations.

Military experts consider the Congolese army one of the most poorly trained and disciplined forces in the world.

Human rights organizations repeatedly have called for accountability in the Congo, alleging that both Congolese troops and rebel groups regularly target civilians with violence and rape.