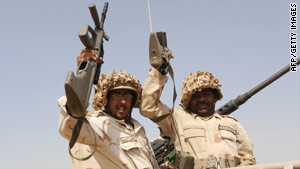 (CNN) -- Fighting in northern Yemen has moved into Saudi Arabia, forcing school closures and sending thousands fleeing, according to the United Nations.

"Fighting has now spilled into Saudi Arabia, reportedly causing 240 villages to be evacuated and more than 50 schools to be closed, " Sigrid Kaag of UNICEF said in a statement this week. "The total number of people displaced by the conflict since 2004 has gone up to more than 175,000, from an estimated 150,000 only a few weeks ago."

As the fighting escalates, the situation is worsening for children, Kaag said.

"During the past three months, children affected by the conflict in the north have seen all their basic rights violated. Lack of safe water, nutrition and hygiene is exerting a heavy toll on their health and well-being, and threatening their very survival," Kaag said.

Kaag said some camps for displaced people are filled and thousands are living just outside the camp.

Yemen's official news agency SABA reported Friday that it was working with the U.N. to create a new refugee camp in Amran.