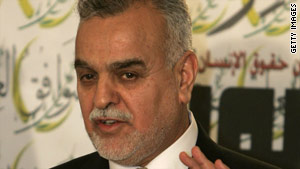 Tariq Al-Hashimi says the law is unfair to Iraqis who were forced to flee the country.
STORY HIGHLIGHTS
RELATED TOPICS

Tariq Al-Hashimi said the law is unfair to Iraqis who were forced to flee violence in their homeland.

He refused to sign the law without an amendment that would increase the number of seats allocated to refugees, many of whom are Sunnis, from five percent to 15 percent.

The constitution stipulates that every 100,000 Iraqis should have one representative in the country's parliament but al-Hashemi said that refugee numbers are not included in how seats have been calculated.

Independent High Electoral Commission Judge Saad al-Riwai said the panel was meeting with legal experts to resolve what he called a crisis situation.

The law will now return to parliament for discussion of al-Hashemi's proposed revisions but al-Riwai said other members of parliament have their own objections.

A prolonged debate would certainly threaten the viability of a January election, seen as a barometer in Iraq's march toward stability and a requisite for the United States to withdraw troops by next summer.

U.S. military officials have said they will begin to draw down combat forces about 60 days after the polling.

The election law was finally passed on November 8 -- after months of political wrangling -- and it had to be unanimously approved by the country's three-member presidency council -- made up of Kurdish President Jalal Talabani, Shiite Vice President Adel Abdul Mehdi and al-Hashimi.

A veto is rare because the passage of a law usually means that it has the blessing of all the political blocs.

The Kurds could also present a setback with threats to boycott the vote unless the seat allocations are assessed in provinces with heavy Kurdish populations.

The tussle over the election law reflects the persistent political jockeying among Iraq's three main ethnic groups for power in the upcoming parliament, which will increase in size from 275 to 323 because of population growth.