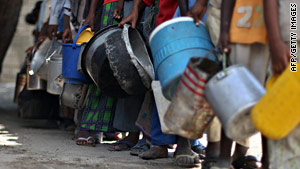 Somalia is in the middle of its worst humanitarian crisis since the famine of the early 1990s, the WFP says.
STORY HIGHLIGHTS
RELATED TOPICS

(CNN) -- Islamist militants in Somalia have warned a United Nations agency to buy food from Somali farmers or stop sending aid to the impoverished African country.

"WFP [World Food Programme] causes many problems for the local Somali farmers by importing food from outside Somalia and that discourages the Somali farmers," al-Shabaab said in a statement.

"So the WFP should buy its supposed food distribution from Somali farmers or stop its operations in Somalia."

The warning could be a desperate measure by al-Shabaab, which is reportedly facing financial difficulties following the withdrawal of Ethiopian forces last year. The Ethiopian invasion of Somalia had outraged many members of the Somali diaspora who had sent money to al-Shabaab, which had vowed to kick out the invading forces.

The WFP is aware of the report, according to a spokesman for the agency who would not say whether WFP was in touch with al-Shabaab.

"WFP is working in Somalia because the country cannot currently support the food needs of its population," Greg Barrow told CNN.

Somalia is in the middle of the worst humanitarian crisis since the famine of the early 1990s, with half of its population -- nearly 4 million people -- in need of food aid, according to the WFP.

Somalia is also one of the most dangerous places in the world: four WFP staff members were killed between August 2008 and January 2009.

Nevertheless, the aid agency said it increased its operations during the first half of this year, providing assistance to nearly 3 million people.