Report: Scores of albinos in hiding after attacks 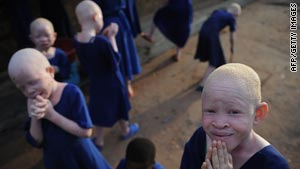 Albino children take a break earlier this year at a Tanzanian school for the blind, which has become a rare sanctuary.
STORY HIGHLIGHTS

(CNN) -- As many as 10,000 albinos are in hiding in east Africa over fears that they will be dismembered and their body parts sold to witchdoctors, the Red Cross said in a recent report.

The killings of albinos in Burundi and Tanzania, who are targeted because their body parts are believed to have special powers, have sparked fears among the population in the two countries, the report said.

Body parts of albinos are sought in some regions of Africa because they are believed to bring wealth and good luck. Attackers chop off limbs and pluck out organs to sell to dealers, who in turn sell them to witchdoctors.

Scores of albinos have fled to Tanzanian schools for the disabled or in emergency shelters set up by police in Burundi to avoid attacks, according to the report.

"Thousands more albinos across a huge swathe of countryside ... are unable to move freely to trade, study or cultivate fields for fear of albino hunters," the International Federation of Red Cross and Red Crescent Societies said.

Tanzanian government officials have said they are mobilizing police to help the embattled population, but admit it is hard to quell the attacks.

Most happen in rural areas, where there is not enough police presence, according to Lucca Haule, assistant commissioner of police.

"We don't have the resources in those places ... it is not easy, but we are trying to map out locations where albinos live so that we can better protect them," he told CNN earlier this month.

In early November, a court sentenced four people to death in northern Tanzania for killing an albino man and selling his body parts. So far, seven people have been sentenced to death for the killing of more than 50 Tanzanian albinos, including children, in the past two years, Haule said. Dozens more are awaiting trial.

Albinism is a genetic condition that leads to little or no pigment in the eyes, skin and hair.

African albinos are discriminated against and face segregation most of their lives. They also battle a high risk of skin cancer.

"Even before the killings began two years ago, albino people in tropical Africa suffered an array of afflictions that made physical survival a desperate struggle," said Salif Keita, a Malian albino singer and human rights activist.

The Red Cross societies in both countries said they need support to respond to the humanitarian crisis.

Since 2007, at least 44 Tanzanian albinos have been killed and 14 in Burundi. Some organizations have put the number at more than 50 in Tanzania.