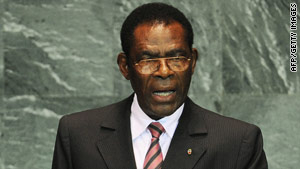 (CNN) -- The president of oil-rich Equatorial Guinea has been re-elected in a vote that human rights groups criticized as unfair.

Mbasogo, who seized power in a 1979 coup, was the reported target of a coup plot that led to the arrest of several Britons in recent years, including the son of former Prime Minister Margaret Thatcher.

This month, the government announced a presidential pardon for British mercenary Simon Mann, who had been serving a 34-year prison sentence in Equatorial Guinea.

Mann had testified that his friend Mark Thatcher was a main partner in the coup plot. Thatcher pleaded guilty in South Africa in 2005 to unwittingly bankrolling the scheme, but he escaped jail time by paying a fine.

The government of Equatorial Guinea said Sunday the elections unfolded "in an atmosphere of tranquility and peace."

Human Rights Watch, however, said last week that conditions in the country "cast serious doubt about the credibility" of the election.

Transparency International, a non-governmental organization that examines corruption worldwide, has ranked Equatorial Guinea as among the world's most corrupt countries.