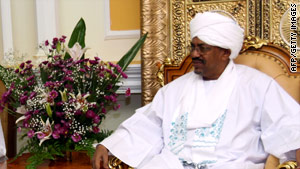 Washington (CNN) -- The United States' special envoy to Sudan reluctantly agreed Thursday that he is negotiating with a government that is accused of carrying out genocide in Darfur in western Sudan.

Retired Air Force Maj. Gen. Scott Gration, under questioning by a House subcommittee, said he has never met Sudanese President Omar al-Bashir, who is accused by the International Criminal Court of war crimes and crimes against humanity in Darfur.

The hearing was the first by the House Subcommittee on Africa and Global Health on a new U.S. strategy for Sudan unveiled by President Obama's administration in October.

Gration said the new strategy calls for ending the violence in Darfur, which the U.S. government has labeled as genocide; working to implement a 2005 peace agreement between al-Bashir's government and an independence movement in southern Sudan, and preventing Sudan from becoming a safe haven for Islamic extremist terrorism.

Earlier this year, the ICC issued an arrest warrant for al-Bashir, accusing him of complicity in war crimes and crimes against humanity in his government's campaign against rebels in Darfur.

Gration said the goal of the U.S. policy is to establish democratic processes in Sudan, which held its last election in 1986 and has been wracked by warfare, drought and other problems.

The 2005 peace agreement calls for national elections in April 2010, followed by a referendum in 2011 on independence in southern Sudan. Darfur is not in the southern region seeking independence.

According to Gration, progress so far has included registering more than 11 million people for the April election, and negotiating agreement between al-Bashir's government and the southern independence movement on how to make progress on 10 of the 12 points of the peace plan.

However, the main goal of the mission remains saving lives in Sudan and that major problems and challenges remain in bringing the goals of peace and sustainable, stable governance to the country, Gration said.

"We just can't afford to fail."

"Together, the United States and its partners are committed to creating an environment in which the parties themselves can bring peace to Sudan."

Committee members questioned if the U.S. policy is realistic, particularly in dealing with the Bashir government and its history of genocide. They noted Sudan has more than 2 million displaced people, had kicked out international aid organizations when the ICC issued its arrest warrant for al-Bashir, and is reportedly arming allied militias ahead of the scheduled 2010 election.

Several asked Gration about a classified list of possible incentives and penalties for Sudan available to the administration under its new policy. Gration responded he was willing to discuss the options in a classified hearing, but provided no details.

"I strongly oppose any approach that provides incentives, concessions to a perpetrator of genocide," said Sen. Sam Brownback, R-Kansas, who was allowed to participate in the House subcommittee hearing in the initial absence of the ranking Republican member. "We cannot trade justice for peace. The ends do not justify the means."

Brownback persistently questioned Gration on his contacts with the Bashir government, eventually forcing Gration to concede his dealings with a government perpetrating genocide.

Gration initially acknowledged dealing with government officials as part of his efforts to increase implementation of the 2005 peace agreement. Under Brownback's questioning, he said the officials are senior members of the Bashir government, and then agreed that the government is currently carrying out genocide in Darfur.

However, Gration defended the U.S. strategy as a balanced effort to achieve long-term progress. He noted that efforts to set up a functioning election system, while incomplete, are intended to bring a vital outcome in a successful referendum for southern Sudan.

"While it's not perfect, you have to remember this is the first time in 24 years they've had elections," Gration said, adding: "The worst thing I can think of is at the end of 2011, we say to the people of Sudan, 'This referendum wasn't free fair and credible, and therefore it's invalidated.' "

John Prendergast, a former Clinton administration security official who now heads a group dedicated to ending genocide, told the panel that the U.S. strategy must hold al-Bashir's government accountable to its commitments under the peace plan.

In particular, he said the peace plan calls for creating conditions for successful elections, including freedom of assembly, full access to media and international observers, and new security laws to reduce harassment of opposition parties.

"None of these preconditions have been met," Prendergast said, adding that a non-credible election would give al-Bashir and his government "false legitimacy." Failure to hold the referendum in 2011 as planned, he warned, would be the "clearest trigger for all-out war."

Committee members asked Gration if China's role as an arms supplier and major investor in Sudan's oil industry is hindering efforts to impose sanctions. Gration said Obama discussed the Sudan issue with Chinese President Hu Jintao on his recent trip to China, but the countries continue to differ on some matters, including arms.