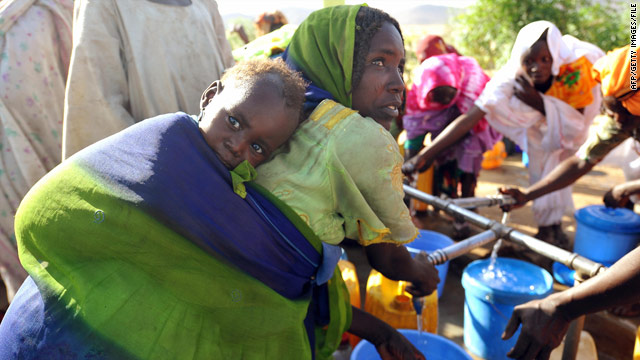 Refugees from Darfur fill buckets with water at a camp in Chad.
STORY HIGHLIGHTS

(CNN) -- The conflict in western Sudan generated global headlines and prompted a humanitarian response by governments, charities and Hollywood celebrities such as George Clooney, Mia Farrow and Don Cheadle.

But despite continuing efforts by activists and aid groups, Darfur seems to get little attention these days.

According to Sudan's government, the war there is over. The international community has shifted its focus from what the United States called genocide in Darfur to broader Sudanese tensions -- a civil war between the Khartoum government in the north and Southern Sudan that ended in 2005 but threatens to re-ignite.

"I would not say there is a war going on in Darfur," Nigerian Gen. Martin Agwai said in August when he stepped down as head of the joint U.N.-African Union peacekeeping mission there. Instead, Agwai labeled the continuing violence, which he blamed on banditry and local conflicts, as low intensity conflict.

Even the U.S. special envoy to Sudan, retired Air Force Maj. Gen. Scott Gration, referred to the conflict as "remnants of genocide" a few months ago, noting that rising violence in Southern Sudan eclipsed levels in Darfur.

Analysts, aid workers and others who know Darfur disagree, citing a litany of reasons why the region renowned for human misery continues to pose a major threat to the stability of the country, as well as East and Central Africa.

• There is no peace treaty in Darfur, only a broken agreement and repeated failed efforts to resume talks.

• People still die there, such as the five Rwandan peacekeepers killed in attacks last week.

• Government and rebel forces have battled intermittently throughout the year, forcing thousands more villagers to flee to camps already bulging with more than 2 million displaced people.

"It's very premature to say that the war is over," said Alun McDonald of Oxfam, an international relief group that works in Darfur. "In recent weeks, one of the camps where we work in North Darfur had 6,000 people arrive. There are still clashes between military groups, between different tribal groups."

People already feel neglected and marginalized, which is a key reason for the conflict in the first place.
--Alun McDonald
RELATED TOPICS

Eric Reeves, a professor at Smith College in Northampton, Massachusetts, who wrote a book on the Darfur crisis, said in an interview that more than six years of warfare has changed the nature of the conflict.

The war began with Janjaweed Arab militias backed by Bashir's military sweeping through Darfur in raids against rebel movements and the civilian populations from which the rebels emerged. Now it has bogged down into stalemate caused in part by the destruction wrought so far, according to Reeves.

With thousands of villages destroyed and almost half the estimated pre-war population in camps, Bashir's government has few remaining "targets of opportunity," Reeves said.

Only one rebel movement -- the Justice and Equality Movement (JEM) -- is capable of offensive strikes against the Sudan military and allied fighters, but it can't hold any new positions taken, Reeves added.

The government says the six-year Darfur war killed 10,000 people, while the United Nations and other international groups put the figure at 300,000. The death rate has decreased this year, but unrest continues.

Government bombing of Muhajeriya, a rebel stronghold in South Darfur, in early 2009 forced thousands of people to leave, Reeves said.

"Our research has shown that the situation in Darfur continues to be very insecure and abusive for Darfurians," Gagnon said.

The type of fighting that characterized much of the war -- aerial bombings, raids on villages -- has mostly halted in recent years "because the population is largely displaced" in camps in Darfur and the neighboring country of Chad, Gagnon said.

"But the war is far from over," she said.

Regardless of the level of fighting, the humanitarian situation remains dire. Bashir's government kicked out international aid agencies in March, and while some have been allowed back, conditions at the displacement camps vary and many are struggling to provide basic needs.

In an essay published by the Sudan Tribune in September, Reeves wrote of the misery: "Nor does 'low-intensity' describe the present soul-destroying nature of existence within the camps: the relentless privations, the pervasive threats to health, the loss of hope, the acute sense of abandonment, and the anger and despair that relentlessly haunt daily existence."

Gagnon said displaced people "are sort of building their lives in the camps because they have no other choice," facing high levels of sexual violence and other hardships.

"Humanitarians will tell you there's shrinking humanitarian space," she said, referring to a declining ability to ensure that people who need them get essential resources and security.

Oxfam's McDonald, who worked in Darfur, noted an increase in carjackings, armed robberies and other localized violence in recent months, including kidnappings of international workers.

"It's not necessarily political," he said, with various groups claiming responsibility for the kidnappings but no clear information on who is behind them.

The instability prevents international aid from reaching rural areas, where "people already feel neglected and marginalized, which is a key reason for the conflict in the first place," McDonald said.

A war renowned for brutality, including systemic rape and the burning of homes and villages by the Janjaweed, has been hard to formally halt. A 2006 peace treaty broke down, and several attempts to restart talks have yielded little progress.

Meanwhile, groups such as Not On Our Watch, devoted to halting atrocities around the world, have raised attention and money for Darfur. Founded by Clooney, Cheadle, Matt Damon, Brad Pitt and others, Not On Our Watch continues to provide grants for relief programs and seek help for Darfur, but executive director Alex Wagner conceded that the world's attention has shifted elsewhere.

With annual rains now ended in Darfur, rumors are rife that combatants may be gearing up.

Chinese weapons and ammunition continue to reach the region despite a U.N. arms embargo on Darfur, according to Enrico Carisch, the former coordinator of the U.N. Panel of Experts on Sudan.

Carisch told a U.S. House subcommittee hearing on December 3 that failure by the United States and European allies to help enforce the arms embargo emboldened "bad actors" and eroded the influence of the United Nations. He said the current inaction contrasted with U.S. efforts in 2004 and 2005 to enforce the embargo as the war raged.

Under the Bush administration, former Secretary of State Colin Powell made the unprecedented declaration in 2004 that Bashir's government and the Janjaweed committed genocide in Darfur.

President Barack Obama's administration announced a new policy for Sudan in October that emphasizes engagement with Bashir's government and Southern Sudan's fledgling autonomous government to implement a 2005 peace agreement that halted the 21-year north-south civil war that killed 2 million people. The U.S. policy also seeks to end the Darfur conflict and prevent Sudan from serving as a safe haven for terrorists.

The U.S. policy still labels Darfur a continuing genocide, and Gration has recently acknowledged continuing Darfur unrest. However, Gration made clear at the House subcommittee hearing that the main focus is getting Bashir's government and Southern Sudan to adhere to the peace agreement's call for national elections - the first since 1986 - next year and an independence referendum in the South in 2011.

Now the violence in Southern Sudan raises questions about the ability to prepare the troubled nation for democratic voting.

"Darfur is a huge crisis, but it is only one part of Sudan," McDonald said. "If the peace agreement between the north and south fails, then it's quite hard to see any peace agreement working in Darfur in the foreseeable future."

Even if a new Darfur peace agreement were to emerge, the ability of displaced people to then return to their homes is far from certain. With destruction and chronic unrest in rural areas, the humanitarian crisis will remain long after fighting ends, Reeves noted.

The greater question may be whether people who have endured years of politicized ethnic warfare pitting Arab-descended groups against non-Arab and African groups could live together, Reeves said.

"I've asked Darfurians, 'Can you imagine living with your Arab neighbors again?,' " Reeves said. "Many say, 'No, we can't imagine that.' "