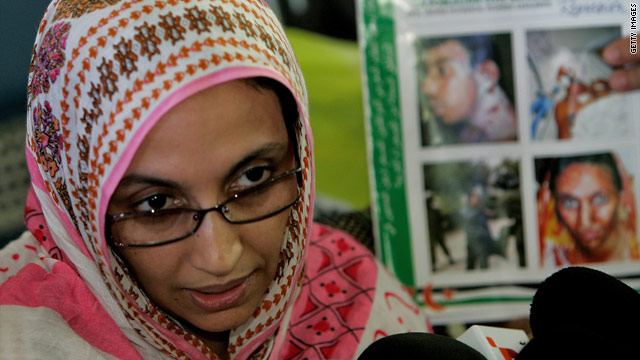 Aminatou Haidar had been on a hunger strike for 32-days, but was finally returned home after Morocco admitted her to Western Sahara.
STORY HIGHLIGHTS
RELATED TOPICS

She ended a 32-day hunger strike as Morocco admitted her to the disputed territory following multi-nation negotiations over her case.

Upon landing, Moroccan authorities returned her passport. They had taken the passport last month when refusing her entry at the same airport when she declined to recognize Morocco's sovereignty over Western Sahara, Lamine Baali, of the pro-independence Polisario Front, told CNN.

"This is a victory for international law and human rights and for the Western Sahara cause," Haidar said on Lanzarote before boarding the plane.

U.S. Secretary of State Hillary Clinton issued a statement, saying, "I was pleased to hear of the government of Morocco's decision to re-admit Aminatou Haidar on humanitarian grounds following her month-long hunger strike in Spain."

"This humanitarian gesture is reflective of the true spirit and generosity of the Moroccan government and people, and underscores the urgency of finding a permanent solution to the Western Sahara conflict," Clinton added.

Spanish Foreign Minister Miguel Angel Moratinos, who met with Clinton in Washington last Monday, said on Friday in Brussels that Spain has "not made concessions."

"We had broad negotiations with the Moroccan authorities. And we have worked in a coordinated way with the United States and France" to find a solution, Moratinos said.

On Thursday evening, Haidar left a Lanzarote hospital, where she had gone hours earlier complaining of abdominal pains, and returned to the airport, where she had conducted most of her 32-day hunger strike. She then boarded the plane bound for her home.

The plane took off moments after the Spanish prime minister's office issued a statement that said Spain "shares the concern of the international community" over the status of the disputed Western Sahara territory but that while awaiting a United Nations brokered agreement, Spain "confirms that Moroccan law applies in the Western Sahara territory."

Haidar had demanded that she be able to return to Western Sahara, a former Spanish colony, without having to acknowledge Moroccan sovereignty over it.

Baali said that Morocco this time did not require Haidar to fill out a landing card upon her arrival, which had been a flash point last month, when she wrote on a landing card that her nationality was Western Saharan, not Moroccan, Baali said.

Haidar arrived at the airport on Lanzarote island -- just off Morocco's west coast -- on November 14, shortly after Moroccan refused her entry at El Aaiun Airport.

She began her hunger strike November 16, but it ended on Friday shortly after she was home in the Hay Hazari neighborhood of El Aaiun, about a 30 minute drive from the airport, Baali said, as supporters reportedly cheered her on.

Haidar was taking liquids initially to help regain her strength, Baali said, and was with her two children and other family members.

Earlier Thursday, the European Parliament abruptly stopped short of voting on the Haidar case when lawmaker Martin Schulz of Germany told the parliament that it appeared "there would be a solution today."

"We can help Ms. Haidar more by being quiet rather than voting a resolution," Schulz said, according to the parliament's press office.

During her hunger strike, Madrid had offered her Spanish citizenship or political asylum, but she declined.

In a statement e-mailed to reporters, Haidar thanked Spain but said, "I do not plan on requesting Spanish, American or Italian citizenship. I live under Moroccan occupation and I advocate, as do the rest of the Saharawi people, for our self-determination."

A U.N.-organized referendum on the territory's final status has been repeatedly postponed. Morocco has presented an autonomy plan to the United Nations but the Polisario countered with an independence plan for the territory's 405,000 people, who are Muslims of Arab or Berber descent.

A senior Moroccan government official, Khalihenna Ould Errachid, earlier in December told CNN+ in an interview that Haidar "has always been Moroccan."

"She was never a part of the ex-Spanish Sahara," the Moroccan official added, "and I say that Aminatou Haidar should return to her Moroccan nationality and say it clearly, and tomorrow she can return, without problem."