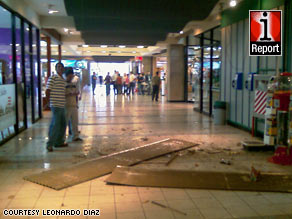 Reinaldo Carballo, a spokesman for the federal Commission for National Emergencies, said the updated death toll came from information given to the agency by Costa Rica Vice President Rodrigo Arias.

In addition, Carballo said, rescuers were trying to reach 300 tourists stranded in a hotel in Varablanca. Carballo said he did not know the tourists' nationalities or the name of the hotel.

There were conflicting reports on the number of dead from Thursday's earthquake. The Commission for National Emergencies had issued a news release earlier Friday saying the quake had killed four people.

The discrepancy may result from the fact that the Commission for National Emergencies reports only deaths it has confirmed, Carballo said. About 32 people were injured, he said.

Survivors described the suddenness and brutality of the quake. Landslides, tumbling rocks and collapsed buildings caused widespread devastation and death.

"I saw how the earth moved and how it took my family -- my aunt, my cousin and her babies," Miguel Angel Marin told CNN affiliate Teletica TV. "It was very hard because I wanted to save them, but I couldn't."

A sobbing Vilma Cambronero was asked what happened to her family.

"Some are well," she said. "Others are buried."

An unidentified woman told Teletica, "Everything started to move and everything fell on top of us. It was a miracle we got out."

More than 1,200 people were stranded, without a way to get out of towns or homes, Chaverri said. Another 1,000 people were living in shelters, he said. iReport.com: Are you there? Send photos, video

"Many people were injured, many buildings were damaged and landslides blocked roads in the area," the U.S. Geological Survey said.

Costa Rican President Oscar Arias Sanchez was scheduled to tour the affected area Friday. On Thursday, he appealed for calm.

"I felt the earthquake," Costa Rican office worker Erick Solorzano told CNN in an iReport message. "I work in a sixth floor, and it was very strong. We felt the building was going to collapse."