(CNN) -- The number of people killed from an earthquake in Costa Rica rose to 34 on Saturday, a government official said. 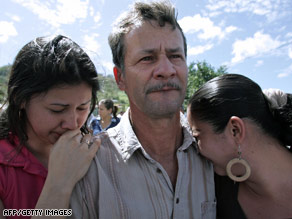 Rigoberto Vargas weeps with his daughters for his missing son on Saturday in San Miguel di Sarapiqui.

Another 64 people were listed as missing two days after the 6.1-magnitude earthquake shook north-central Costa Rica, the official said.

Emergency personnel continued to search for victims affected by the quake, according to Ministry of Infrastructure spokeswoman Silvia Chaves.

Rescuers reached 200 tourists who had been stranded in a hotel in Varablanca, and they were taken to safety, she said.

Survivors described Thursday's quake, which was centered about 20 miles north-northwest of the capital city of San Jose, as sudden and brutal. Landslides, tumbling rocks and collapsed buildings caused widespread devastation.

"I saw how the Earth moved and how it took my family -- my aunt, my cousin and her babies," Miguel Angel Marin told CNN affiliate Teletica TV. "It was very hard because I wanted to save them but I couldn't."

More than 1,200 people were stranded, without a way to get out of towns or homes, Red Cross official Milton Chaverri said. Another 1,000 people were living in shelters, he said. iReport.com: Are you there? Send photos, video