(CNN) -- Brazilian firefighters called off their search for survivors Monday, one day after a church roof collapse in Sao Paulo killed at least nine people and injured more than 100 others. 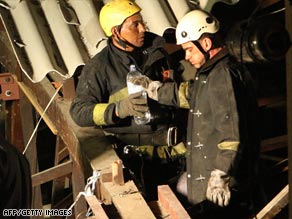 Firefighters work early Monday at the site of a church roof collapse in Sao Paulo, Brazil.

All those listed as missing have been located, and officials said they believe they will not find any more victims, BandNews FM said on its Web site, citing Ronaldo Marzagao, Sao Paulo's assistant secretary of public security.

On its Web site, the public relations firm handling communications for the church, Brickmann & Associados Comunicacao, listed the names of nine fatalities and more than 100 parishioners being treated at 15 hospitals.

The youngest fatality was 15 years old; the oldest was 80, the agency said.

Officials had no comment on what caused the collapse at Reborn in Christ Church, a popular evangelical congregation in the heart of Brazil's largest metropolis. The incident took place at about 7 p.m. Sunday (4 p.m. ET).

Several hundred worshippers were attending Sunday evening services at the evangelical church when the structure's concrete roof fell in on them.

Witnesses told Record TV that they felt a strong wind followed by a blast -- after which, as one put it, the roof collapsed "like dominoes." Swarms of church members crowded the scene Monday, many of them praying for loved ones as bodies were pulled out.

At the time of the collapse, victims were treated on the pavement in makeshift emergency care units, while others in critical condition were rushed off to nearby hospitals.

Reborn in Christ is one of the largest congregations in Sao Paulo.

Helena DeMoura contributed to this report for CNN.

All About Brazil • Sao Paulo