(CNN) -- Human-induced global warming is real, according to a recent U.S. survey based on the opinions of 3,146 scientists. However there remains divisions between climatologists and scientists from other areas of earth sciences as to the extent of human responsibility. 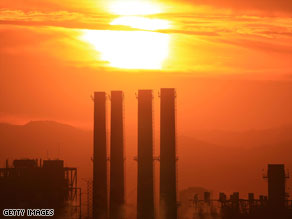 A survey of more than 3,000 scientists found that the vast majority believe humans cause global warming.

Against a backdrop of harsh winter weather across much of North America and Europe, the concept of rising global temperatures might seem incongruous.

The study released today was conducted by academics from the University of Illinois, who used an online questionnaire of nine questions. The scientists approached were listed in the 2007 edition of the American Geological Institute's Directory of Geoscience Departments.

About 90 percent of the scientists agreed with the first question and 82 percent the second.

The strongest consensus on the causes of global warming came from climatologists who are active in climate research, with 97 percent agreeing humans play a role.

Petroleum geologists and meteorologists were among the biggest doubters, with only 47 percent and 64 percent, respectively, believing in human involvement.

"The petroleum geologist response is not too surprising, but the meteorologists' is very interesting," said Peter Doran associate professor of earth and environmental sciences at the University of Illinois at Chicago, and one of the survey's authors.

"Most members of the public think meteorologists know climate, but most of them actually study very short-term phenomenon."

However, Doran was not surprised by the near-unanimous agreement by climatologists.

"The debate on the authenticity of global warming and the role played by human activity is largely nonexistent among those who understand the nuances and scientific basis of long-term climate processes," said Doran.