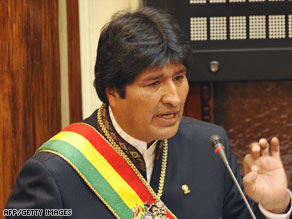 "With this decree," Morales said in a nationally televised address from an oil field in Cochabamba, "we nationalize all the petroleum business in Chaco for all Bolivians."

"We are aware of the presidential decree but cannot comment," he said. "We support Pan America's energies with any discussions they have with the Bolivian government."

Morales wore a white safety helmet with the words "Chaco nationalized" printed on the front when he made his announcement. The Bolivian president guaranteed the petroleum workers that their jobs will be safe.

Formed in 1997, Chaco employs about 90 Bolivians, the company says on its Web site.

Chaco is dedicated to the exploration and production of hydrocarbons, BP says.

Morales decreed in 2007 and 2008 that the government should nationalize various petroleum companies.

His actions Friday came less than 48 hours before Bolivians vote Sunday on a new constitution that would give the central government more power and control.

All About Evo Morales • Bolivia