MEXICO CITY, Mexico (CNN) -- A suspect in police custody calls himself a "stewmaker" for a Mexican drug lord, saying he disposed of about 300 bodies by dissolving them in acid. 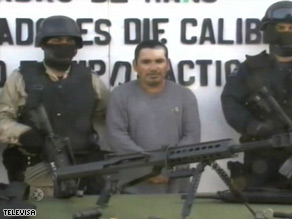 Santiago Meza Lopez has asked for forgiveness from the families of those he says he targeted.

Meza, who is shown handcuffed and flanked by guards in video released by the government, calls himself "Teo's stewmaker" and says he was paid $600 a week for his macabre duties. The victims, he said, were men who owed Garcia something or had betrayed him.

A native of Guamuchil, Sinaloa, Meza was arrested along with three other people, including a minor female who said she was contracted for a social event. Other people sought by police were in the area at the time but were able to escape, officials said.

Now, Meza is asking for forgiveness.

"To the families, please forgive me," he said in the video.

Mexican police have not specifically said whether they believe that all elements of Meza's story are credible.

He has told police where he buried some of the bodies.

Now authorities, along with citizens groups and the families of the disappeared, are searching for them.

They hope Meza could have information about the location of their friends and relatives.

Authorities say Garcia formed part of the Arellano Felix cartel but is currently said by intelligence sources to be operating with the Sinaloa cartel.

Officials say seven brothers and four sisters of the Arellano-Felix family inherited the Tijuana, Mexico-based drug cartel from Miguel Angel Felix Gallardo in 1989, after his arrest for drug trafficking.

Today, the notorious cartel is split into two factions that have engaged in brutal fighting that has accounted for nearly all the violence in Tijuana, according to the U.S. Drug Enforcement Administration. More than 400 people were killed last year in drug-related violence.

Eduardo Arellano-Felix, who police said was the last remaining brother to have an active role in the cartel, was arrested in October.