BOGOTA, Colombia (CNN) -- Colombian emergency officials have begun evacuating 800 families from an area at high risk from the expected eruption of a volcano that killed at least six people in November. 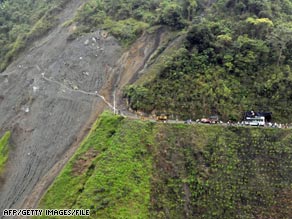 Colombians make their way across a landslide in November after the Nevado del Huila volcano erupted.

The Nevado del Huila volcano is on orange alert, meaning an eruption is probable within days or weeks, the Colombian Institute of Geology and Mining said last week.

An eruption would cause an avalanche down the Paez and Simbola rivers, officials said. The town under evacuation, Belalcazar, sits on the bank of the Paez River about a half-mile (less than a kilometer) from the junction with the Simbola River. It was the worst-hit area in November's eruption.

The Colombian national emergency agency said Monday it is ready to evacuate thousands of residents if the volcano's condition turns to red, which means an eruption is imminent or ongoing.

The snow-capped Huila, the highest active volcano in Colombia, last erupted on November 20. At least six people, including four children, died then.

Gas and hot ash caused snow on the mountain peak to melt, sending mud, rocks and floodwater rushing down the Paez and destroying at least 20 homes and washing out five bridges, the presidential office said at the time.

Much of the sparsely populated region about 155 miles (250 kilometers) southwest of Bogota is a reservation for Nasa indigenous communities. All six fatalities were native Indians, the government said. The youngest victim was a year old.

The Huila volcano, which has a summit of 17,598 feet (5,364 meters), has erupted four times. The first documented eruption occurred in the 1500s, then it stood silent for more than 400 years, according to the Web site volcanolive.com.

Colombian emergency officials said Monday they are asking the 800 families where they want to be moved to, Caracol Radio said.

Scientists with the Colombian Institute of Geology and Mining, commonly known as Ingeominas, said they did not detect any major action inside the volcano Monday, Caracol reported.

Ingeominas and the National System for Emergencies are monitoring the volcano around the clock and have acquired new equipment, including additional telecommunication gear and an infrared camera to monitor Huila's temperature.

Officials also plan to install a microphone on Huila to detect any new rumblings from inside the volcano, Caracol said.

Officials already are monitoring the volcano with four stations that detect seismological activity, a video camera, a communications network and a system that measures mudflow, Caracol said.

All About Colombia • Bogota (Colombia)