HAVANA, Cuba (CNN) -- William Potts picks up his daughters from school every day. People consider him a generous neighbor and a good father. 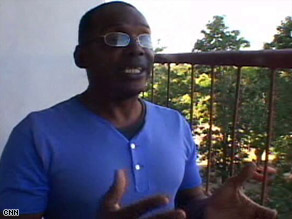 William Potts smuggled a firearm aboard a flight, hijacked the plane and forced the crew to fly to Cuba.

But few know how this eccentric American ended up in Cuba.

"I came to Cuba 25 years ago. I hijacked an airplane," said Potts, who was convicted of air piracy.

Potts says he was enthused by Fidel Castro and his revolution. He imagined a racial and social utopia that could be replicated in his own country.

In 1984, he smuggled a firearm aboard a commercial flight and forced the crew to fly to Havana, Cuba. No one was injured.

"In my revolutionary naivete, I came looking for military training," he says.

Instead, he ended up in jail. He spent 13 years behind bars in Cuba.

In 1971, the United States and Cuba signed an agreement in which each government agreed to prosecute hijackers or return them to the other country.

Potts, who married after being released from prison, is now divorced and lives on the outskirts of Havana with his two daughters, ages 4 and 7. He makes some money letting his neighbors use his prized Internet connection.

But the New Yorker is homesick and says his elderly parents need help.

"I committed a crime and paid for it," he says. "Now what I want is to return home because I have to attend to my family."

Watch Potts explain why he thinks he deserves a pardon »

He says the time is right.

Potts wrote a letter to President Obama asking for a pardon that would let him return to the United States without fear of being jailed.

There are thought to be 700 American fugitives hiding in Cuba. Members of the Black Panthers, Puerto Rican independence movement members and common criminals have sought sanctuary on the island. For the most part, they try to go unnoticed.

Perhaps the most famous is black activist Assata Shakur, who was convicted for killing a police officer in New Jersey in 1973 but escaped from prison in 1979 and ended up in Cuba.

Potts says he wants to leave behind his radical days and expects that Obama will finally allow him to do that.

All About Cuba • Crime • Barack Obama