LIMA, Peru (CNN) -- A mayor in Peru has suggested that the federal government legalize illicit drugs and administer them through the national health ministry, a newspaper reported Friday. 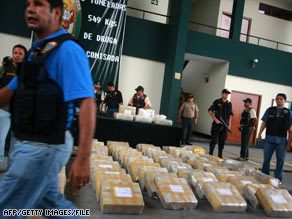 Gustavo Sierra, mayor of the Surquillo district in Lima, said a federal drug law is hypocritical because it allows maximum legally allowed quantities for some drugs and plants but doesn't say where to acquire them, the Peru 21 newspaper reported in a front-page story headlined, "Say yes to drugs?"

Sierra said the federal government should adopt his position in its war on drugs, adding that he will take the matter up with the nation's executive branch.

His proposal has drawn strong criticism as well as support.

Milton Rojas, a specialist with a private, nonprofit, anti-drug organization called Cedro, told Peru 21 that the mayor's initiative would lead to greater drug use.

"This is not an alternative that corresponds with Peruvian reality, given drugs' low prices and large production," Rojas said. "There are no serious studies concerning the legalization of stupefacients."

In addition, Rojas said some drugs -- such as PCP -- are addictive and have bad health consequences.

"Legalizing drugs would only bring more insecurity," he said. "It still would be sold on the street."

Others see it differently.

"I am in favor of marijuana and cocaine leaf," Cacares said. "They are medicinal plants rejected by science because of the false belief that they are drugs."

It has been demonstrated, he told Peru 21, that those plants can help some diseases, including some eye treatments, anxiety and depression.

"There are modern medical treatments that use these components," he said. "They are not used here."

Cocaine, he said, should be used in pharmaceutical labs again because it has demonstrated pain-relieving qualities. Cacares said he remembers a throat lozenge in the 1950s that used cocaine.

Surquillo, in the central part of Peru's capital, Lima, is a lower- and middle-income residential and commercial district, parts of which are considered dangerous.

Several travel Web sites warn about crime, one of them saying: "Surquillo should be avoided, specially at night. Do not ever walk alone there. It is full of thieves and gang violence."

Surquillo is one of 43 districts that make up Lima, the district's Web site says. It has a population of about 100,000.

The district has a motto on its Web site: "Surquillo is changing. ... You change too."

All About Peru • Lima (Peru) • Cocaine