RIO DE JANEIRO, Brazil (CNN) -- Former presidents of Mexico, Colombia and Brazil called Wednesday for the decriminalization of marijuana for personal use and a change in tactics on the war on drugs, a Spanish news agency said. 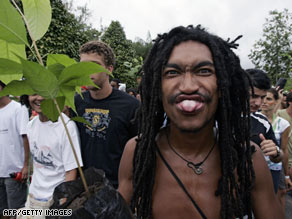 Ex-presidents Ernesto Zedillo of Mexico, Cesar Gaviria of Colombia and Fernando Henrique Cardoso of Brazil made their announcement at a meeting in Brazil of the Latin American Commission on Drugs and Democracy, the EFE news agency said.

"The problem is that current policies are based on prejudices and fears and not on results," Gaviria said at a news conference in which the commission's recommendations were presented.

The 17-member panel worked on the report for a year and will forward it to all Latin American governments as well as the United States and the European Union, EFE said. Gaviria said the time is right to start a debate on the subject, particularly with the pragmatic openings provided by the election of President Barack Obama in the United States.

"In many states in the United States, as is the case in California, they have begun to change federal policies with regard to tolerating marijuana for therapeutic purposes. And in Washington there's some consensus that the current policy is failing," EFE quotes Gaviria as saying.

Decriminalization should be accompanied by treatment for addicts and public service campaigns on abuse prevention, the commission said.

"If you don't help those who are dependent, you are half way there because they are going to commit crime to get money and pay for the drug," Gaviria said.

Cardoso said the group called for only the decriminalization of marijuana and not other illicit drugs because "you have to start somewhere" and it would have been unrealistic to ask the same for all drugs, EFE said.

The decades-old criminalization of personal consumption has failed to stop the plant's cultivation and distribution, the group said.

The commission urged that all current criminal prosecution be aimed at drug cartels and organized crime and not marijuana smokers, EFE said.

Zedillo did not attend the news conference but worked on the report, Cardoso said.

Wednesday's recommendation was the second time in less than a week that a Latin American government official called for decriminalization.

A mayor in Peru suggested Friday that the federal government legalize illicit drugs and administer them through the national health ministry.

Gusto Sierra, the mayor of the Surquillo district in Lima, said a federal drug law is hypocritical because it allows maximum legally allowed quantities for some drugs and plants but doesn't say where to acquire them, the Peru 21 newspaper reported in a front-page story headlined "Say yes to drugs?"

Sierra said he will take the matter up with the nation's executive branch.