(CNN) -- A volcano near southwest Colombia's border with Ecuador erupted on Saturday, leading the government to issue a "red alert" for the region. 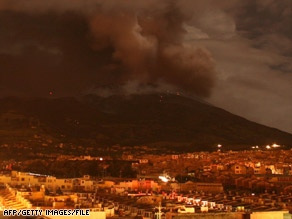 The Galeras volcano is shown on January 17, 2008, from Pasto, Colombia.

There were not believed to be any fatalities or injuries in the blast, which happened at about 7:10 p.m. ET (12:10 a.m. Sunday GMT), said Carlos Lineras of the Colombia Institute for Geology and Mines.

The institute issued an evacuation order for about 7,000 people living near the Galeras volcano.

The volcano is not in a heavily populated region.

Galeras has erupted several times since it became active again in 1989. The only fatalities were in 1993, when nine people -- all scientists or tourists in or near the volcano's crater -- were killed.