Colombia volcano erupts twice in less than a week 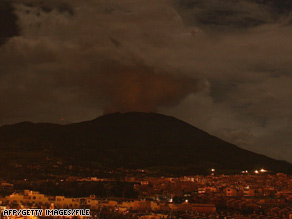 The Galeras volcano, erupting here in January 2008, is considered the most active volcano in Colombia.

None of the 8,000 residents who live near the Galeras volcano was reported injured, officials said. It is the second time in less than a week that the volcano has erupted.

The government's Geological and Mining Institute raised the alert level from yellow to red, and officials opened eight shelters for displaced residents. Authorities ordered the 8,000 people who live near the volcano to evacuate.

The city of Pasto, which has about 35,000 residents and is more than 12 miles (about 20 kilometers) from the volcano's crater, received a heavy downpour of ashes Friday.

The volcano, near Colombia's border with Ecuador, previously erupted Saturday. It has erupted several times since it became active again in 1989.

The only fatalities were in 1993, when nine people -- all scientists or tourists in or near the volcano's crater -- were killed.

The volcano's crater is 14,029 feet (4,276 meters) above sea level in the Andes Mountains. It is considered the most active volcano in Colombia.

All About Colombia • Andes Mountains