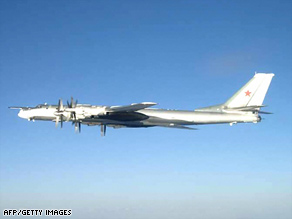 "At no time did Russian planes enter Canadian air space, but within 24 hours of the president's visit here ... we did scramble F-18 fighter planes from NORAD in Canada command," Peter MacKay said in a news conference in Ottawa.

The Russian planes were in international waters, about 118 miles (190 kilometers) northeast of Tuktoyuktuk, in Canada's Northwest Territories.

"It was a routine flight over international airspace," Yevgeniy Khorishko, a spokesman at the Russian Embassy in Washington, told CBC news.

"As has been done on previous occasions, (Canadian pilots) sent very clear signals that are understood, that (the) aircraft was to turn around, turn tail and head back to its own air space, which it did," MacKay said.