(CNN) -- Venezuelan President Hugo Chavez has ordered troops to immediately take over rice-processing plants in his country, accusing some businesses of ignoring prices set by the government. 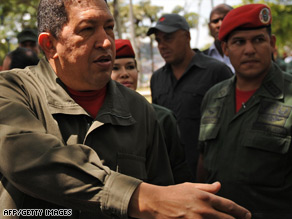 "What are some of the sectors of the agricultural industry doing? They buy rice from producers, and they don't want to produce regulated rice," Chavez said in a televised address Saturday.

"Well, I've ordered the intervention, starting right now, of all those sectors of the agricultural industry."

Chavez did not say how long the takeover will last, but warned that some companies could be nationalized if they tried to interrupt supplies.

U.S.-owned Cargill, with 2,000 employees spread among 22 locations in Venezuela, is among the major rice processors in the country.

Since winning re-election in 2006, Chavez launched a campaign to nationalize strategic segments of Venezuela's economy, including cement companies, a steel mill and oil ventures.

Last month, Venezuelans approved a Chavez-backed constitutional referendum that allows him to run for a third six-year term in 2012.