By Brian Byrnes
For CNN

BUENOS AIRES, Argentina (CNN) -- Federal officials said Monday they are probing allegations by a former investigator into the deadliest terrorist attack in Argentine history that he was kidnapped and tortured by men who said they were national intelligence agents. 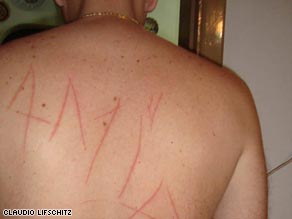 Claudio Lifschitz shows off the scars he says kidnappers carved on his back.

Claudio Lifschitz, 43, said three hooded men threw him into the back of a truck on Friday night and put a plastic bag over his head.

They then questioned him on details of the probe into the bombing of the Argentine Jewish Mutual Association (AMIA) building in Buenos Aires on July 18, 1994, he said.

Eighty-five people died and more than 200 were injured in one of the bloodiest anti-Semitic attacks in the world since World War II.

"The police are investigating [the alleged kidnapping] as we speak," said Miguel Ambrosio, legal secretary in the office of federal Judge Rodolfo Canicoba Corral. "Once the judge heard the details of the alleged incident, he ordered an investigation to the police via telephone."

Lifschitz said his abductors tortured him while asking about the AMIA investigation.

"I heard the noise of a blowtorch, and that's when the worst started, and I started to feel a burn on my left arm, and I could smell my hair on my arm burning," Lifschitz told CNN. "Then I felt them slicing my back with a knife."

Images of Lifschitz taken after the alleged kidnapping showed bloody marks on his back where the letters 'AMIA' had been scratched.

The assailants also carved numbers into his arm; the significance of the digits is unclear. Lifschitz said he was released a few hours after being abducted. He was treated for injuries in a hospital.

"They told me that I wouldn't die unless they wanted me to," he said Sunday.

Lifschitz, who has also worked as a lawyer for Argentine Federal Police, is the former legal secretary for Judge Juan Jose Galeano, who headed the investigation into local connections to the AMIA bombing until he was removed from the case.

Lifschitz has testified that Galeano mishandled the investigation, including allegedly making a $400,000 bribe to a key witness. Galeano was taken off the AMIA investigation in 2003 and was removed from his position as a judge in 2005.

The investigation in the AMIA bombing has dragged on for nearly 15 years, with no indictments and a series of accusations of cover-ups and corruption.

Argentina, Israel and the United States have blamed the Mideast-based Hezbollah terrorist organization for the attack.

In March 2007, Interpol issued arrest warrants for five Iranian officials and a Lebanese national in connection with the bombing. Tehran has repeatedly denied any involvement.

Former Argentine President Carlos Menem also has been investigated to see whether he was involved in a cover-up.

Menem appeared in federal court Monday on an issue related to the AMIA attack investigation but declined to testify. He did submit a written statement denying that he had any involvement in a cover-up.

Lifschitz said his alleged abductors were interested in the possible Iranian connection.

"They started to ask about information about the SIDE (State Intelligence Secretariat) related to the AMIA attack," Lifschitz told CNN.

"And then they asked me about cassettes of conversations between the Iranians. That shows that the SIDE doesn't deny that they had intercepted some phone lines with the help of some judges.

"They were afraid that I had copies of these tapes and I would present them to a judge, but I told them that I don't have any copies of the tapes."

Lifschitz, who said he is a non-practicing Jew, also told CNN the men were interested in his religion.

"I always wear a rosary around my neck, and they grabbed me by the neck and said, 'Why are you wearing this if you're a Jew?'"

In addition to the AMIA attack, a similar deadly anti-Semitic terrorist attack took place on March 17, 1992, when 29 people died and more than 250 were injured in a bombing at the Israeli Embassy in Buenos Aires. No one has been prosecuted in that case.

Argentina has one of the world's largest Jewish populations, estimated around 250,000.

Jewish leaders from around the world called for an investigation into the attack on Lifschitz.

"We trust Argentine authorities will quickly find those who carried out this brutal attack on Mr. Lifschitz," said David Harris, executive director of the American Jewish Committee. "This awful incident undermines Argentina's important progress to bring to justice those responsible for the murderous attack on AMIA's headquarters."

Earlier this month, an Argentine court ordered the seizure of property owned by a former Iranian diplomat in Buenos Aires sought for his role in the 1994 AMIA attack.