BRASILIA, Brazil (CNN) -- A doctor excommunicated by the Catholic Church for performing an abortion on a 9-year-old rape victim received a standing ovation during a national convention on women's health, according to a local media report. 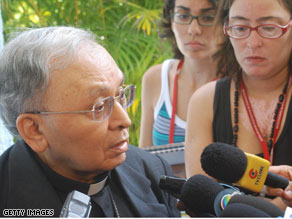 The response came during the opening ceremony of an event hosted by Brazilian Minister of Health Jose Gomes Temporao.

The newspaper O Povo reported that Temporao called on the audience to acknowledge the "brilliant" work done by a medical team in the abortion, performed in Brazil's northeastern city of Recife.

The girl was pregnant with twins after being raped, allegedly by her stepfather, police were quoted in media reports as saying. The abuse had gone on since the girl was 6, authorities said.

The abortion was performed March 4 during the fourth month of pregnancy, according to media reports

Archbishop Don Jose Cardoso Sobrinho of Recife excommunicated the doctor, the child's mother and the medical team involved in the procedure.

However, the stepfather was not excommunicated, with Sobrinho telling Globo TV that, "A graver act than (rape) is abortion, to eliminate an innocent life."

The child was not excommunicated, Sobrinho said, because Catholic Church law says minors are exempt from excommunication.

"The church is benevolent when it comes to minors," he told Globo TV. "As for the adults, especially those who approved it, performed this abortion, the excommunication is applicable."

The case has outraged the Brazilian public and fueled a controversy reaching the highest levels of church and state in a nation whose law bans abortion except in cases of rape.

"The question posed is very simple. There is a Brazilian law which states that a pregnancy can be interrupted in case of rape," Temporao said.

"It is legitimate for the church to have its dogmas, but these dogmas must not be imposed on society as a whole," he added.

Earlier, a verbal spat ensued between President Luiz Inacio Lula da Silva and the archbishop over the church's decision.

"As a Christian and a Catholic, I find it deeply lamentable that a bishop of the Catholic Church has such a conservative attitude," Lula said on Globo TV.

"In this case, the medical profession was more right than the church," he said.

Meanwhile, a Vatican cleric told Italy's La Stampa newspaper that he supports the Brazilian archbishop's decision to excommunicate all involved in the abortion except for the child.

Dr. Olimpio Moraes, one of the doctors involved in the procedure, said he thanked the archbishop for his excommunication because the controversy sheds light on Brazil's restrictive abortion laws. He said women in Brazil's countryside are victimized by Brazil's ban on abortion.

Some of the doctors vowed to continue attending church services, despite being expelled.

"The fact that I was excommunicated will not keep me from going to Mass, praying, conversing with God, and asking him to illuminate me and my colleagues in our medical team to help us take care of people in similar cases," one doctor said.

TV Globo reported that the child, who is from a town outside Recife, has stayed in the city to recover and to escape media coverage. Her current condition is not known.

A new report by Brazil's IPAS, a non-governmental organization that works with the health ministry, indicates that more than 1 million women undergo illegal abortions in Brazil each year. About 250,000 are treated by doctors for traumas due to botched abortions, said Beatriz Jalli, an IPAS official.

Studies at a Brazilian hospital dedicated to treating female victims of violence, the Perola Byington in Sao Paulo, indicated that more than 40 percent of the cases involved children.

"This is why the Recife case is so important for women in Brazil," Jalli said.

Jalli said the liberated "Girl from Ipanema" image that many foreigners have of Brazilian women is far from reality.

"We live in a male chauvinistic, patriarchal society with a very high rate of sexual crimes against women and minors," she said. "Our reproductive rights are constantly criminalized."

All About Brazil • Abortion • The Roman Catholic Church