CIUDAD JUAREZ, Mexico (CNN) -- Nine bodies have been found in a common grave in the desert south of Ciudad Juarez, Mexico, according to Chihuahua state prosecutor's spokeswoman Daniela Gonzalez. 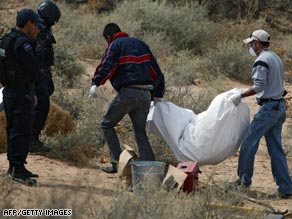 Police look on as one of the nine bodies found in a common grave near Ciudad Juarez, Mexico, is removed.

Investigators have yet to determine the identities of the seven men and two women found in the grave, Gonzalez said. They have not released information on how they were killed or how long they have been there.

Juarez, which is across the border from El Paso, Texas, has become one of the major battlegrounds as drug cartels fight both each other and Mexican authorities. The conflict has made violence increasingly common in Juarez, Tijuana and other Mexican border towns.

Earlier this month, the U.S. Consulate in Juarez specifically warned Americans to avoid an area southeast of the city.

The discovery of the bodies comes as 5,000 Mexican soldiers are descending this weekend on Juarez in an effort to end the violence that has claimed more than 400 lives so far this year.

"The reality is that the military presence in the last several weeks has caused the violence to subside," he said. "We were averaging about 10 murders a week; and since February 26, when the troops starting arriving, we have been averaging about one."

Enrique Torres, spokesman for the Chihuahua Joint Operation, said by Sunday there will be 7,500 military personnel, 2,300 federal police and 1,600 city police working together to patrol the city and aggressively fight the cartels.

"We are launching a full frontal attack" Torres said. "We will also be tackling other types of organized crime -- money laundering and kidnappings."

Corruption among the police force has been a major concern to local and international authorities. Torres said the city has been preparing for a year to "clean up the local police."

Already, he said, more than 500 city police officers have been fired because they failed to pass the "trust test." As part of the "clean-up," federal authorities have been requiring officers to take a polygraph test.

To prevent corruption among the just arrived soldiers, Torres said they will be frequently rotated. "They will only work in the region one to two months and then they will be sent to other parts of the country."

Ferriz, the mayor, said government officials are doing everything in their power to stop the violence; they have brought in consultants from Colombia and adapted programs that have proven successful there, such as a civilian corruption watchdog program.

But he explained that a big part of the problem is coming from the north.

"The majority of the weapons used for homicides here have been identified as coming from the United States" he said.

Ferriz said that during a recent raid, local police confiscated two .50-caliber military-style rifles. Some weeks later they arrested another man bringing in another .50-caliber rifle.

"He bought it off the internet in the U.S.," Ferrez said. "It is so easy there for organized crime to get access to these types of weapons. The arms and cash contraband into Mexico from the United States must be stopped."

Ferriz siad he plans to travel next week to Washington to meet with U.S. lawmakers about the security situation in and around Juarez.