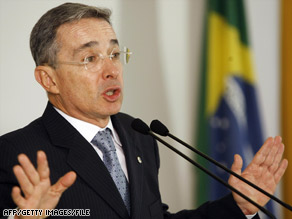 Ten guerrillas dressed as police planned to infiltrate the family farm of Defense Minister Juan Manuel Santos over Easter week and kill the official and his family, Uribe said Thursday on national television.

The guerrillas, who belong to the FARC, the Spanish acronym for Revolutionary Armed Forces of Colombia, were captured, Uribe said.

Uribe thanked and congratulated federal authorities, saying, "This investigation had been proceeding for several months, and fortunately the National Police has dealt this well-placed blow."

Police Director Oscar Naranjo said eight of the guerrillas were captured at a property near Santos' farm in the municipality of Anapoima, 54 miles (87 kilometers) from Bogota, the capital. Officials did not reveal where the other two guerillas were captured.

The FARC, the largest and oldest guerrilla group in Colombia, has been waging war against the government since the 1960s.

Security analysts have said the FARC has about 9,000 to 12,000 armed guerillas and several thousand supporters, mostly in rural areas.

The guerrilla group operates mostly in Colombia but has carried out extortion, kidnappings and other activities in Venezuela, Panama and Ecuador, analysts said.

The guerrilla group is known to pull off audacious operations, sometimes dressed as police, soldiers or other government officials.

On April 11, 2002, a 20-member commando group dressed in police and military uniforms faked a bomb alert at the parliament building in Cali, Colombia's third-largest city. They tricked 12 congressmen into getting on a bus by telling them the military provided it for their safety. They then drove off, taking the congressmen into captivity.

Eleven of those congressmen died in June 2007 during a shootout between military and the FARC. The sole surviving congressman, who was released in February, said the FARC shot the hostages when the soldiers approached.

All About Colombia • FARC • Alvaro Uribe