Commentary: U.S. freedoms not to blame for Mexico's drug war

By Wayne LaPierre
Special to CNN

Editor's note: Wayne LaPierre has served as the executive vice president and chief executive officer of the National Rifle Association of America since 1991. His latest book is "The Global War on Your Guns: Inside the U.N. Plan to Destroy the Bill of Rights." 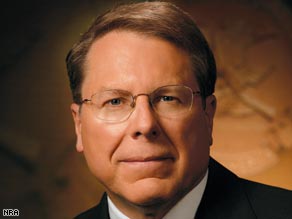 (CNN) -- Here's a summary for the time- or attention-challenged: Never surrender freedom for laws that can't affect criminals; they disobey laws for a living.

Nobody is surprised that Attorney General Eric Holder wants to make good on his promise to ban guns. We just didn't know whose tragedy he'd seize to advance his agenda.

Now we do. It's the drug-driven death and violence in Mexico at the hands of ruthless criminal cartels.

Barely a month on the job, Holder cited the Mexican cartel killings as the excuse to resurrect the Clinton gun ban.

Though a new face to some, Holder is a rabid Second Amendment foe from the Clinton administration who helped orchestrate the 1994 Clinton gun ban.

America has made this mistake already. So let's learn the lies that led to their gun ban.

Even earthworms learn from experience

Ask any anti-gun politician to define an "assault weapon," and the honest answer is, "I know one when I see one."

Anderson Cooper reports live from the Mexican border as the brutal drug trade violence spills over into the U.S.
Tonight, 10 ET on CNN

When cosmetics alone can infringe constitutional freedoms, we're all in trouble. But that's precisely how the 1994 gun ban came about.

The gun-ban lobby and national media lied with lockstep conformity by playing endless footage of fully automatic machine gun fire. They fooled the American people and the U.S. Congress into thinking they were banning "high-powered," "rapid-fire," "battlefield-bred" guns designed to "spray fire from the hip."

None of that was true.

Then Sen. Dianne Feinstein convened anti-gun bureaucrats to conduct a firearm beauty pageant. They browsed photos of hundreds of perfectly legal semiautomatic rifles. They picked 19 they deemed most military looking. And they banned them.

But the guns aren't designed or used by the military. They're commonly owned semiautomatic rifles that fire one shot when the trigger is pulled.

They cannot "spray fire," nor are they designed to be fired "from the hip."

Nor are they the choice of terrorists in Afghanistan or drug gangs in Mexico. They prefer fully automatic machine guns, which our soldiers use.

Congress was so doubtful about the ban's effectiveness, they limited it to a 10-year experiment. So it expired in 2004, and for good reason. It was useless all along.

As the study mandated by that Congress found, "The banned weapons and magazines were never used in more than a modest fraction of all gun murders" in the first place. The ban had absolutely no effect on gun crime.

But what about Mexico?

Of course, everyone's rooting for Mexican President Felipe Calderon's government to crush the drug cartels' stranglehold. But our rights are not what's wrong.

Nobody can substantiate claims that U.S. guns cross the border "by the thousands" or "account for 95% of weapons used by Mexican drug gangs." Because it's not true.

Replying to Feinstein in subcommittee hearings last week, William Hoover, assistant director of field operations at the Bureau of Alcohol, Tobacco, Firearms and Explosives, said, "The investigations we have, that we see, for firearms flowing across the border don't show us individuals taking thousands of guns a day or at a time flowing into Mexico."

Yet reporter after politician after news anchor parrot the lie as readily as high schoolers gossip, and with equal disregard for truth.

That's how gun abolitionists claim Mexican gun laws are so strict that our "weak laws" (read: freedoms) are to blame for "fueling the violence" in Mexico.

Well, to believe that:

• You have to believe these butchers and beheaders break every Mexican law they want except Mexican gun laws, which they honor -- while they break America gun laws.

• You have to believe that Mexico's drug cartels, which possess the wealth and armies of nations, prefer American semiauto target and hunting rifles over fully automatic machine guns and any other military arms they want to crush opposition.

• You have to believe Mexican drug lords -- who make Forbes magazine's list of billionaires -- don't get large lots of weaponry on the transnational black market but instead choose to trifle with paperwork at U.S. gun stores.

• You have to believe that narco-terrorists who buy fragmentation grenades, grenade launchers, explosives, body armor, biometric security equipment, infrared surveillance technology and intelligence-grade reconnaissance gear will salute and obey a new American gun law -- if only we'd pass one.

Get real, get tough, but get away from our rights

Everything Mexico's murderous thugs are doing is already illegal. At issue is not the absence of law, but the absence of political will to enforce the laws that both nations already possess.

Even Immigration and Customs Enforcement said, "We have the laws we need. We just need to more effectively enforce them."

Those that make possible Mexico's colossal corruption wear the garb of not only drug lords and gun runners, but also of too many city mayors and police chiefs, state bureaucrats and military officers.

A $40 billion criminal enterprise could not exist without the complicity of these powerful co-conspirators. And these cartels are being abetted by American media and politicians who blame our freedoms for it.

We should seal the border. Punish the guilty. And use existing gun and drug laws against violent drug syndicates here and in Mexico.

The opinions expressed in this commentary are solely those of Wayne LaPierre.