CARACAS, Venezuela (CNN) -- Venezuelan President Hugo Chavez says he would be willing to accept prisoners from the Guantanamo Bay detention center, which U.S. President Barack Obama has said he will close, the Venezuelan government said Thursday. 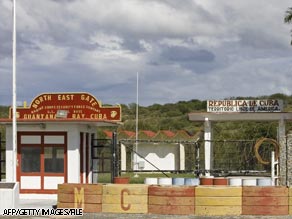 President Obama has pledged to close the detention facility at Guantanamo Bay, Cuba.

Chavez also said he hopes the United States will give Cuba back the land on which the naval base is located, the government said in a news release.

"We would not have any problem receiving a human being," the government release quoted Chavez as saying in an interview Wednesday with Al Jazeera TV.

The United States obtained the Guantanamo base in 1903, after Spain's surrender in the Spanish-American War of 1898. In 2002, then-President George W. Bush opened the detention center to hold what the Bush administration categorized as enemy combatants captured in Iraq, Afghanistan and elsewhere.

U.S. officials have not said what will happen to prisoners at the camp when it closes, nor are there are any known plans for any to be sent to Venezuela.

Chavez attended the second summit of South American and Arab heads of state in Qatar earlier this week.

"I hope someday the Hebrew people will be liberated from that caste," the release quoted him as saying in the 90-minute Al Jazeera interview.

From Qatar, Chavez traveled to Iran, where he met with President Mahmoud Ahmadinejad on Thursday.

Maria Carolina Gonzalez contributed to this report for CNN.