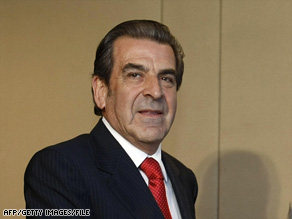 Amid a cheering crowd waving flags Sunday, Frei accepted the nomination of the coalition party known as Concertacion, setting the stage for a showdown with Chilean billionaire Sebastian Pinera, whose center-right platform has focused on job creation and economic reform.

The former president first took office in 1994 and is widely heralded as an influential figure within the Chilean government.

General elections in Chile are scheduled for December 11.

All About Chile • Augusto Pinochet