(CNN) -- Bolivian President Evo Morales on Sunday pledged to continue his hunger strike until Monday, when Congress -- including the opposition-led Senate -- is set to reconvene. 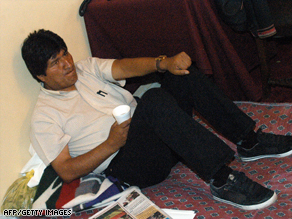 Morales' speech, televised by a state-run station, was his first formal address to the nation since starting the strike Thursday in the government palace.

More than three days into the strike, Morales appeared healthy during his address.

The president wants the opposition-led Senate to set a date for general elections that are expected to give him another five-year term.

Morales on Friday called on opposition members -- who walked out of the Congress in mid-session late Thursday -- to pass the election law, the government-run Bolivian Information Agency said.

The nation's first indigenous president reportedly carried out an 18-day hunger strike in 2002, when he was expelled from Congress.