Paraguay's president says he fathered child out of wedlock

ASUNCION, Paraguay (CNN) -- Paraguayan President Fernando Lugo acknowledged Monday that he is the father of a 2-year-old child who was conceived when he was a Roman Catholic bishop. 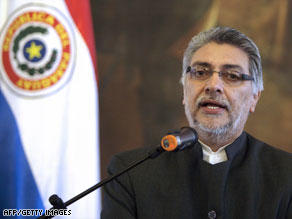 Paraguayan President Fernando Lugo speaks at a news conference in Asuncion on Monday.

"It's true that there was a relationship with Viviana Carrillo," Lugo told reporters, citing the mother. "I assume all the responsibilities that could derive from such an act, recognizing the paternity of the child."

He said he was making the acknowledgment "with the most absolute honesty, transparency and feeling of obligation."

The announcement came in the week after Carrillo had filed suit in a city in southern Paraguay seeking a paternity test.

Judge Evelyn Peralta, who is overseeing the case, said she was treating it routinely. "It is a case like any other, which involves the president and nothing more," she said. "It will be processed as it should be."

But some opposition party members said it appeared that Lugo had practically been forced to acknowledge what happened; that he had not done so willingly.

Lugo was laicized last year, around the time he assumed the presidency.

Journalist Sanie Lopez Garelli contributed to this report from Asuncion.

All About Paraguay • Fernando Lugo • Vatican