By Karl Penhaul
Special to CNN

Editor's note: Journalist Karl Penhaul spent several weeks tracking the gangs of the Mexican underworld, the corrupt officials who support them and the cops trying to halt the violence. 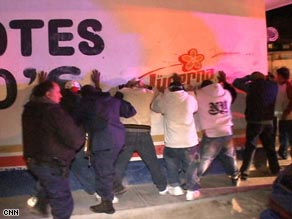 Mexico police round up gang suspects in Juarez, across the border from El Paso, Texas.

CAMARGO, Mexico (CNN) -- There are no welcome signs on the approach to Camargo.

It's a hardscrabble Mexican border town and home turf for "Los Zetas," a gang of hitmen and corrupt former special forces cops on the bankroll of the Gulf Cartel.

Local journalists explained if we went there we'd be getting "tangled up in the hooves of the horse." They said Zeta gunmen recently smashed one reporter's fingers with a hammer as a warning to the media to stay away.

The plaza was deserted -- for a few minutes at least. Then the throb of engines broke the Sunday morning peace. Scores of pickup trucks with heavily tinted windows began circling. Occasionally a window would crack open. We were clearly being watched.

A black SUV pulled up alongside the soda stand. One of the occupants stepped out. First I saw the ostrich skin cowboy boots, then the highly polished 9 mm pistol strapped to his side. It was loaded with a longer-than-usual ammunition clip, custom-made to pack extra bullets. It was a brazen flouting of Mexican law to carry a gun that way.

No words. Not even a stare. But his message seemed unequivocal. Our visit to Camargo lasted just 20 minutes. Taking the strong hint, we immediately left town.

Much as we wanted to explore the underbelly of the drug war raging in Mexico, it was clear the capos, or bosses, and their hired guns were in no mood to talk. Their business thrives best in the shadows. Our best chance of getting some insight was to track down a cast of peripheral characters who live in the gray areas, somewhere between the extremes of right and wrong.

The hospitality was little better in nearby Miguel Aleman. Customers, even an argumentative drunk, fell silent as we ordered a beer in a dingy cantina. A couple of tired-looking prostitutes retreated to a far corner. They may have been down on their luck but they knew talking to outsiders wasn't worth the cost. Here the Zetas are well-known for enforcing their law of silence at gunpoint.

Watch Mexican cops on the hunt for gang members »

Along this stretch of the border Los Zetas are kings. From here their bloody reach stretches far across Mexico and deep into Central America. They run immigrant smuggling, drug trafficking, prostitution rackets, video piracy and local politics.

In the glitzy industrial city of Monterrey, we met a marijuana dealer smoking his own merchandise in the bathroom of a dance club.

The man, whom we can't name for his safety, explained how he had been recruited at gunpoint two years earlier by the Zetas to be what they call a "landowner" (terrateniente in Spanish) -- in charge of cocaine distribution in a handful of neighborhoods.

He said Zeta gunmen bundled him into a truck and with assault rifles aimed at his head they gave him three options -- pay them $100,000, begin working for them or die.

Over the next few days, he said, the same gunmen scared off or killed rival drug dealers, leaving him in charge of what he said was a $4,000-a-day business.

It all ended, he said, when Mexican soldiers kicked down his door. He was never detained but his cover was blown. Local Zeta commanders thanked him for not ratting on them by giving him permission to retire from the business.

But recently he's gone into business for himself selling $2 bags of pot. He realizes working independently of the Zetas may be fatal.

"Maybe I'm stupid or something, but I don't know how to do anything else. If they catch me it's simple, they'll kill me. It's just not allowed to work freelance," he said.

An old friend of mine in Monterrey knew the marijuana peddler well and vouched for his story. He never made good on his promise to give us a recorded account. He went on a 24-hour drug binge. When we caught up with him again he was smoking crack, sweating profusely and paranoid his former paymasters would exact revenge.

Mob assassins are no longer content with efficient execution-style killings. Sinaloa cartel hitmen regularly place pig masks on the faces of their Juarez cartel victims. And in a grim seasonal touch, killers in Juarez decapitated a cop and placed a Father Christmas hat on his severed head.

But in a sidewalk cafe in Guadalajara, "Jose" explains there is a clearly defined set of narco-rules that must be followed. A small-time Latin American cocaine trafficker I've known for years introduced me to Jose.

Jose is old school. He tells me he's been in the cocaine trade since the early 1980s almost since it began, has worked internationally and done a stretch in prison

"From the outside it might look like the cartels are just going around killing people. But on the inside there's a code of conduct, rules. You might not want to kill somebody but you have to because it's all about respect," he said. "This cannot work if there's no respect. Above all, the capos use logic to solve the problems."

Jose added that he believed groups of corrupt officials and law enforcement officers were using the militarization of the border region not as a means to crush the drug cartels but as a way of forcing them to pay a bigger slice of the drug profits as bribes.

"The authorities and the cartels use the rule of 10. By that I mean for every 10 kilos of cocaine we move, we have to give three to the authorities and keep seven for ourselves," he explained. "When times are bad the authorities may arrest somebody or grab an entire consignment and that's a way for forcing up their percentage take."

Jose's assertion might seem like feverish conspiracy theory if it weren't for the growing list of Mexican officials, ranging from local cops and foot soldiers to generals and men at the highest levels of law enforcement, who've been busted for allegedly profiting from the drug trade.

In November, Mexico's former drug czar was detained on suspicion that he may have accepted $450,000 a month in bribes from drug traffickers. He had been in charge of the attorney general's office that specializes in combating organized crime.