Behind the scenes: Will Latin America welcome Obama?

In our Behind the Scenes series, CNN correspondents share their experiences in covering news and analyze the stories behind the events. After a one-on-one interview with President Obama on Wednesday, CNN en Español's Juan Carlos López is traveling with Obama to Mexico City and to the Summit of the Americas in Trinidad and Tobago. 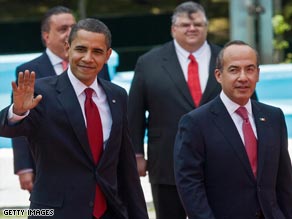 MEXICO CITY, Mexico (CNN) -- It's the return of an American president to Mexico City. Although George W. Bush visited the country several times, he never made it to this city of more than 20 million people, and it is President Obama's first visit to Latin America.

Obama's relationship with Mexico started on shaky ground, although the first foreign leader he met with as president-elect was Mexican President Felipe Calderón. Reports from the Pentagon and the CIA considered that Mexico was at risk of becoming a failed state, something that didn't sit well with the Calderón government.

Washington corrected course and even admitted its own responsibility in Mexico's growing drug war, which killed 6,000 last year alone. Statements by Cabinet members and Obama himself calmed things down, but tensions arose again. Congress ended a pilot program that allowed Mexican trucks into U.S. territory, as contemplated in the North America Free Trade Agreement; Mexico, in line with the treaty, retaliated by imposing fees on 90 U.S. products.

Even so, the bilateral relationship is at a high point and large-scale protests aren't expected when Obama visits the Mexican capital.

But there are pending issues, such as immigration reform, trade and a pressing question in this capital: Who will the next U.S. ambassador be? Local media have been reporting that Carlos Pascual, a Cuban-American expert on Europe and a former U.S. ambassador to Ukraine, is Obama's choice, but the fact that he wrote a report for the Brookings Institute on Iraq and the importance of reconstructing a failed state wasn't well received in political and government circles.

Obama and Calderón have a lot to sort out in this one-day visit. Then comes the Summit of the Americas in Trinidad and Tobago, where Obama will face 33 heads of state, including Venezuelan President Hugo Chavez, who called Obama ignorant on Latin-American issues, and other leaders who want Cuba, a member of the Organization of American States suspended since 1962, to be reinstated.

Although Obama lifted some restrictions on travel and remittances to the island by Cuban-Americans, many in the region want more, including the lifting of the decades-old embargo, something Obama says he is not considering.

It is not clear if Obama will be welcomed in the same way he was by Europe two weeks ago, but so far the signs are positive -- to have a U.S. president saying he is willing to listen to and treat Latin American neighbors as equals is something the region isn't used to.

All About Latin America • Barack Obama