ASUNCION, Paraguay (CNN) -- A second woman stepped forward Monday to say that Paraguayan President Fernando Lugo fathered a child out of wedlock when he was a Roman Catholic bishop. 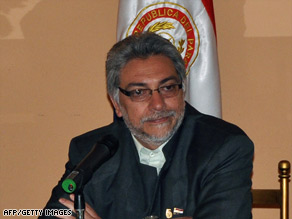 Paraguayan President Fernando Lugo says Monday he will comply with justice on the latest paternity allegation.

Benigna Leguizamon said Lugo fathered her son in 2002 in the city of San Pedro. She served notice that Lugo has 24 hours to acknowledge paternity or she will take legal action.

"I am waiting in good will," she said in an interview on CNN affiliate Telefuturo TV. "But if they don't do something, oh, my God."

Lugo, 57, acknowledged last week that he is the father of a 2-year-old child conceived in the months before he stepped down as bishop.

He said last week he was making the admission "with the most absolute honesty, transparency and feeling of obligation."

Without acknowledging paternity, he expressed similar sentiments Monday about the latest allegation.

"We're going to act always in pursuit of the truth ... in this private matter," he said in a nationally televised announcement on Telefuturo.

"It's true that there was a relationship with Viviana Carrillo," Lugo told reporters, naming the mother. "I assume all the responsibilities that could derive from such an act, recognizing the paternity of the child."

Leguizamon, 27, said Monday that last week's announcement had encouraged her to come forth.

"When I saw the case with Viviana, I was strengthened to make my accusation," Leguizamon said.

She said she made the accusation to help her 6-year-old son, who is starting school. She will ask for a DNA test, she said.

In last week's case, Judge Evelyn Peralta said she was treating it routinely.

"It is a case like any other, which involves the president and nothing more," she said. "It will be processed at it should be."

But some opposition party members said it appeared that Lugo practically had been forced to acknowledge what happened and that he had not done so willingly.

Lugo was made a lay Catholic last year, around the time he assumed the presidency.

All About Paraguay • Fernando Lugo • The Roman Catholic Church