(CNN) -- A brutal Maoist guerrilla group that terrorized Peru during the 1980s but pretty much disappeared when top leaders were captured in the 1990s is making a resurgence. 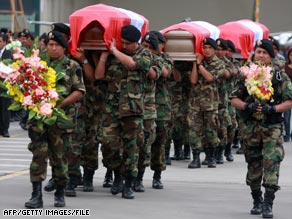 In the latest of several recent attacks by the Sendero Luminoso, known in English as the Shining Path, 14 government soldiers were killed in an ambush this month. It was, a Sendero leader said afterward, "the strongest blow" against the government in quite a while.

It also was not an isolated incident.

"It's like that horror movie, 'Friday the 13th,' " said Bernard Aronson, President George H.W. Bush's assistant secretary of state for inter-American affairs from 1989 to 1993. "You think you've killed the beast, and the beast returns."

In the countryside of central and southern Peru where the rebels were strongest, Sendero waged an assassination campaign against government officials, the heads of state-owned farming collectives, business owners and even peasants who opposed the guerrillas. Political rivals, including other Marxists or leftists, were not immune either.

Sendero also conducted daring attacks in Lima, the capital. Rebels blew up electrical transmission towers to cause citywide blackouts, bombed factories and set off explosives near government offices and inside the ruling party's political headquarters. Assassinations were carried out with seeming impunity on the streets of Lima.

"They terrorized Peru," said Alvin Adams, a former U.S. ambassador to Venezuela and the State Department's associate coordinator for counterterrorism from 1987 to 1989.

In a sign of how desperate the situation had become, then-President Alberto Fujimori suspended the constitution in 1992. Peruvian officials now say Fujimori took the war against the Sendero too far, and he was convicted this year of human rights abuses.

A turning point came in September 1992, when the government captured Sendero leader Abimael Guzman in a Lima apartment. Authorities, who had been watching the apartment, found empty vials of psoriasis medicine in his garbage and knew they had found their man. Guzman, a former university philosophy professor, was known to suffer from the skin ailment and had come into the city from his jungle hideout to seek treatment.

The arrests of other top leaders in the 1990s seemed to ensure the demise of the group, which had split into two factions.

Sendero attacks continued sporadically, but the guerrillas seemed destined for the back pages of history, as their numbers and effectiveness diminished. In the late 1980s and early 1990s, Sendero was believed to have about 5,000 guerrillas. By 2002, analysts estimated that the group had about 200 members.

But Sendero, which always had worked closely with many of Peru's estimated 300,000 coca growers and drug traffickers, was far from dead.

In the early part of this decade, the U.S. State Department and others warned of a possible resurgence. That warning appears to have come to fruition.

Perhaps most famously, Sendero set off a bomb outside the U.S. Embassy in Lima in March 2002, a few days before President George W. Bush was to visit. Nine people died and 30 were injured.

In a June 2003 attack on a jungle labor camp, rebels took about 70 workers hostage and demanded a large ransom. The workers were recovered safely, but there were conflicting reports on whether a ransom was paid.

"I've been watching them reappear now with a sense of dread ... like dying embers that have been brought back to life," said retired four-star Army Gen. Barry McCaffrey, who was drug policy director for President Clinton.

Yonah Alexander, a senior fellow at the Potomac Institute for Policy Studies and director of its International Center for Terrorism Studies, said, "The left-wing terrorists are still alive and kicking."

Aronson, the former assistant secretary of state, said he wonders whether Sendero is as strong as it was 20 years ago.

"It's unclear whether this is just a localized version of Sendero or a movement that has some legs," he said. Nonetheless, he added, the situation is "worrisome."

Although Sendero was never popular with Peruvians, Alexander sees an ideological bent to the resurgence.

"You can arrest someone," he said. "You can kill someone. But you can't kill an idea."

And that idea, Alexander, Aronson and others say, has its roots in poor economic conditions and the lack of social justice.

"The mission that Sendero tried to communicate for a very long time is back there because circumstances changed. The circumstances are right for striking for social and economic reasons," Alexander said, adding, "I was surprised it didn't happen before."

"The problem is the country doesn't work very well," he said. "Eighty-five percent of the people are living in rudimentary conditions. They look at their government and say. 'There's no justice here.' "

Sendero's renewed life, McCaffrey said, "is a comment on the incompetence, the goofiness of the Peruvian government."

Aronson sees a "resurgence of the left in Latin America partly because of the economic crisis."

At the heart of Sendero's power lies its alliance with Peru's drug trade, which often pays the guerrillas for security, intelligence and logistics. Marxist guerrillas in Colombia known as the FARC have struck a similar alliance with that country's narcotraffickers.

McCaffrey calls it "a convergence between terrorism and crime." The drug trade in Peru, he said, "produces a mountain of cash, and Sendero will exploit that."

Aronson reiterated a point that U.S. officials have made before: The war on drugs cannot be separated from the fight against terrorism.

"It just shows why fighting drugs isn't just about fighting drugs," Aronson said. "It's about combating forces of violence that are attacking democracy."

And he and others said the Sendero has been allowed to get back in the game because the United States was not paying much attention, distracted in part by the September 11, 2001, attacks and the wars in Iraq and Afghanistan.

"This shows why we have to continue to pay attention and be involved in Latin America in a strong way," Aronson said.

Alexander said, "This is a forgotten continent from the point of view of U.S. policy. It has fallen through the cracks. Everyone is looking elsewhere."