In Canada, Afghanistan not 'forgotten'

(CNN) -- Afghanistan has been called "the forgotten war" but for Canadians, it is the war. 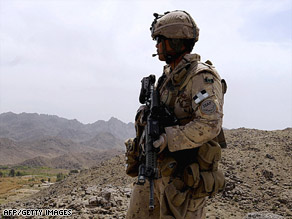 More than 2,800 Canadian troops and dozens of civilian specialists are currently in Afghanistan.

As U.S. troops begin increased deployments to Afghanistan, the United States can look to its northern neighbor for insights on the frontlines and the home front.

Canada's involvement began in the aftermath of the September 11, 2001, terrorist attacks. "There was a feeling in Canada that it had to be done," said Alan Henrikson, a professor of diplomatic history at Tufts University.

Canadian forces increased their numbers in 2006. And last year, following a national debate, the Canadian government extended the mission -- which was to end this February -- until the end of 2011.

More than 2,800 Canadian troops and dozens of civilians are currently in Afghanistan. Most of them are based in the Kandahar province in the southern part of the country, home to some of the worst violence and instability. At least 117 Canadian troops have been killed in Afghanistan as of Wednesday. Canada has had no troops in Iraq.

See a breakdown of some countries with troops in Afghanistan »

Afghanistan is the largest recipient of development aid from Canada. According to the government, Canada will have authorized $1.2 billion in aid to Afghanistan from 2002 through 2011.

"Relative to other involvements of Canada around the world, it's an enormous commitment," Henrikson said. "It is proportionally larger than the stake the United States has in Afghanistan."

But some recent polling suggests that the increasing violence and slow pace of progress are taking a toll on support for the war.

More than half -- 55 percent -- oppose having Canadian troops in Afghanistan, according to a Harris/Decima poll released in April. Forty percent support the policy.

"Afghanistan continues to be a lightning-rod for controversy among Canadians," said Jeff Walker of Harris/Decima in a statement.

In a March poll conducted by Angus Reid Strategies, 48 percent of those surveyed said they'd like the bulk of Canadian troops to be withdrawn before 2011. Another 35 percent said they should be withdrawn as scheduled.

Mario Blais, godfather of a female Canadian soldier recently killed in Afghanistan, told the Canadian Press it's time to pull the troops out.

"I think she did this for absolutely nothing," Blais told the news agency. "The Russians were in Afghanistan for many years and they couldn't push them back. I ask myself what Canada is doing."

Jonathon Narvey, a founding member of the Vancouver-based Canada-Afghanistan Solidarity Committee, said this is precisely when the Canadian mission needs public support.

Arguing that the mission was consistent with Canadian foreign policy traditions, Narvey said pulling Canadian troops out of the conflict could lead to more violence and possibly a civil war.

"We're for a robust involvement, and if [Afghanistan] is going to get back on its feet after decades of war, it's only going to do so with huge international involvement. So, more, not less," he said.

Before the vote that extended the mission, the Canadian government commissioned an independent panel to study its future role in Afghanistan.

Though the report concluded that "our interests do not seem self-evident," it listed several reasons for a continuing role in Afghanistan: Global and Canadian security, preserving Canada's international reputation and the "well-being of some of the world's most impoverished and vulnerable people."

The policy's philosophical foundation lies in Canada's sense of responsibility to the international community, some observers say.

That self-image dates back to the 1950s, said Patrick James, a professor of international studies at the University of Southern California.

Though Canada had no direct interest in the Suez crisis of 1956, Lester Pearson, a Canadian diplomat, won a Nobel Prize for helping pull together the world's first international peacekeeping force to mediate the conflict and avert a wider war.

"[The experience] entrenched in the Canadian mind that 'we are the peacekeepers and the peacemakers,'" James said. Hence, "due to its reputation and self-image, bailing on Afghanistan ... would strike people as being damn irresponsible," he said.

Observers say another compelling motive for Canada to continue its involvement is its relationship with the United States.

"In the background, there's always the sense of keeping the United States happy," James said.

During the past year, the Canadian mission has increasingly focused on rebuilding Afghanistan.

Canadians military forces were partnered with civilian experts -- police, corrections officers, development experts -- said Elissa Golberg, who served as the Canadian Representative in Kandahar last year. She was the civilian counterpart to the brigadier general on the military side.

Some core priorities: Building up the capacity of the Afghan military and police, providing basic services like education and water, managing and securing the Afghan border with Pakistan and helping build institutions that forge political reconciliation.

The United States now seems to be taking a similar approach. In February, President Obama approved the increase in U.S. troops, in part to help bolster security, train the Afghan army and assist in rebuilding efforts.

Hundreds of nonmilitary specialists -- such as agricultural experts, educators and engineers -- also are headed to the region.

U.S. Brigadier Gen. John Nicholson, who is implementing the increase of American forces in southern Afghanistan, said they would take advantage of the Canadian experience.

"[They] are the ones who built the relationships, made the investments in the Kandahar provincial government and have the mechanisms in place. We will simply plug into the existing Canadian mechanisms," he said in an April 5 interview with the Canwest News Service.

Understanding tribal dynamics is key, Golberg said. For example, ethnic Pashtuns dominate southern Afghanistan, and there "are some districts in Kandahar that have 19 different tribes," she said.

When it comes to practical matters like allocating money and contracts, those dynamics and historical ties have an "impact on everything," she said.

Golberg also noted that a bottom-up approach of empowering local communities was important. "People see their district leaders, their cop at the end of the street as the first face of government, so those are things we need to strengthen," she said.

Meanwhile, she said, government ministries in Kabul and regional governors need to be held accountable. "This is new for a country that, in the past, has had very limited central government," she said.

"The whole objective of this is that you have an Afghan government that is viable and capable of providing basic services and basic security to its population," Golberg said. "That's the endgame."

The Canadian leadership, however, is modest about what it can accomplish in Afghanistan.

"We are not ever going to ever defeat the insurgency. Afghanistan has probably had -- [based on] my reading of history -- an insurgency forever of some kind," Canadian Prime Minister Stephen Harper told CNN's Fareed Zakaria in March.

"We have to have an Afghan government that is capable of managing that insurgency and improving its own governance."

All About Canada • Afghanistan War • NATO