(CNN) -- A third woman has come forward claiming that Paraguayan President Fernando Lugo fathered a child with her out of wedlock. 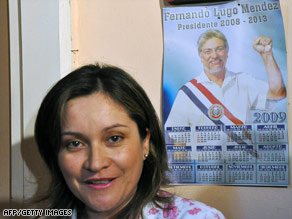 Damiana Moran says she is speaking about the child to stop political opponents from exploiting the situation.

Damiana Moran, a teacher, told reporters Wednesday that she is confident Lugo will recognize the paternity of the 16-month-old boy.

"He has the will to take responsibility as it corresponds to the rights of the child," she said.

Moran's claim is the third in two weeks against the leftist president, who shot to power eight months ago after spending years as a Roman Catholic bishop fighting for the rights of his poor parishioners.

Lugo, 57, acknowledged last week that he is the father of a 2-year-old child conceived in the months before he stepped down as bishop.

Then on Monday, a second woman claimed she also bore a child with Lugo.

Benigna Leguizamon said her son was conceived in 2002, and that she was going public to help the 6-year-old boy, who is starting school.

She has asked for a DNA test to establish paternity.

"The law presumed that he who does not take the DNA test accepts paternity," her lawyer, Sergio Park, said Wednesday.

The third accuser, Moran, said she had worked for Lugo's election and was speaking out about the child to prevent the president's political opponents from exploiting the situation.

"The most important thing for me ... is my political role ... with my community and with my society. ... (That) is what drove me to clarify this before this story is manipulated as it was with the two other women," she said.

But some opposition party members said it appeared that Lugo had practically been forced to acknowledge what happened, that he had not done so willingly.

Lugo was made a lay Catholic last year, about the time he assumed the presidency.

CNN's Lonzo Cook and Claudia Dominguez contributed to this report.

All About Fernando Lugo • Paraguay