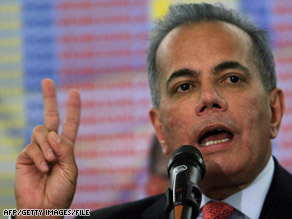 Manuel Rosales denies that he illegally enriched himself as governor of Zulia state.

He was supposed to have turned himself in to authorities last week but failed to appear. His attorney said then that Rosales had fled to Peru and would seek asylum there.

Peruvian Foreign Minister Jose Antonio Garcia Belaunde said that the asylum was granted on humanitarian grounds and that recent statements by Rosales against Venezuelan President Hugo Chavez were not taken into account, the state-run Andina news agency said.

Venezuelan officials say Rosales illegally enriched himself as governor of Zulia state from 2002 to 2004.

Rosales denies the allegation, saying Chavez is out to get him for political reasons and is persecuting him on trumped-up corruption charges.

"Since they haven't been able to take me off the political map by the electoral route, now they're using the power they have in all the movements of the public prosecutor," Rosales told CNN en Español last month.

One of Rosales' lawyers noted that Chavez said publicly in October 2008, before Rosales was charged, that he wanted the mayor in prison.

In last month's interview, Rosales called the charges that he had illegally accepted money "totally false" and said he not only declared all of his income, but paid taxes on it.

Katiuska Plaza, district attorney for Zulia state, said in a 26-count complaint last month that Rosales illegally enriched himself in 2002 and 2004.

Rosales called the district attorney's actions "a manipulation" and said the prosecutor "is acting on Chavez's orders."

Another prominent Chavez opponent was arrested this month on corruption charges.

Former Venezuelan Defense Minister Raul Baduel played a key role in turning back a coup attempt against Chavez in 2002 but broke with him in November 2007 over constitutional changes Chavez was proposing. Baduel has been a strong Chavez critic since then.

Baduel, who also was the president's military general-in-chief, was arrested at gunpoint in front of his wife April 2, the general's attorney said at the time. It was Baduel's second arrest on charges that he stole $14 million from the armed forces.

He has denied the allegation and said last year the charges were politically motivated.

And Antonio Ledezma, an opposition figure who is mayor of Caracas, is finding his powers reduced. Last week, the pro-Chavez National Assembly shifted many of his powers to the federal government.

Ledezma has accused Chavez of orchestrating protests against him.