As deaths mount in Brazil flooding, more rain is forecast

RIO DE JANEIRO, Brazil (CNN) -- The death toll from flooding that has covered large parts of Brazil continued to rise Friday, with the government reporting seven new fatalities, bringing the total to 38. 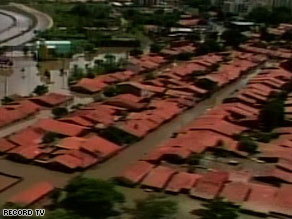 Floodwaters reach almost to the tops of some homes in Piaui state in Brazil.

Rain has fallen steadily in some parts of the country for more than two weeks and is forecast to continue for another 10 days. World Vision, a relief agency working in Brazil, predicted it could take 30 days for flood waters to recede.

Communities in 10 states have been swamped by the floods, though most of the fatalities have occurred in the country's northeast, officials said.

The Brazilian government was working with local governments Friday to deliver food, cleaning materials and other supplies to the affected areas -- using helicopters to reach some areas made impassable by flooded roads.

All About Floods • Brazil • Climatology