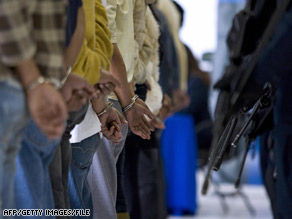 Police guard suspected members of the Beltran Leyva cartel after they were arrested in a 2008 raid.

Rodolfo Lopez Ibarra, known as El Nito and believed to be a top lieutenant in the Beltran Leyva cartel, was arrested Monday at an airport in Nuevo Leon state, said the Mexican National Defense secretary.

Along with the suspects, officials said they also confiscated a Cessna 550 airplane, two cars, a large quantity of drugs and cash, firearms and a hand grenade.

Soldiers acting on an anonymous tip arrested the eight men and five women, including one minor, National Defense said in a release Tuesday.

According to media reports, someone alerted authorities when a tipster noticed heavily armed men waiting at the airport in northern Mexico. Ibarra was on a flight back from a baptism in Acapulco at which drug cartel chief Arturo Beltran Leyva had anointed him with the top post in Nuevo Leon, the news reports said.

A published photo of Ibarra after his arrest shows him wearing a long-sleeved printed shirt and blue jeans, a forlorn look on his face as he gazes off to the side.

Ibarra, 33, was the second top suspect from the Beltran Leyva cartel arrested in recent weeks. In March, authorities announced the arrest of Hector Huerta Rios, also known as "La Burra" or "El Junior."

Like Ibarra, he was arrested in the city of San Pedro Garza Garcia in Nuevo Leon state, along Mexico's border with the United States.

Mexican officials also have recently announced the arrests of several other high-ranking cartel suspects as President Felipe Calderon wages a battle against a drug trade he says killed 6,500 people last year. About 2,000 more Mexicans are believed to have been killed this year.

In April, authorities announced the arrest of Vicente Carrillo Leyva, a suspected leader of the Carrillo Fuentes drug cartel.

A couple of weeks earlier, officials said they had arrested Sigifredo Najera Talamantes, a drug-trafficking suspect accused of attacking a U.S. consulate and killing Mexican soldiers.

Talamantes, also known as "El Canicon," also is suspected in attacks on a television station in Monterrey in Nuevo Leon, the state-run Notimex agency said.

That same week, the Mexican military also arrested the son of a top drug cartel lieutenant.