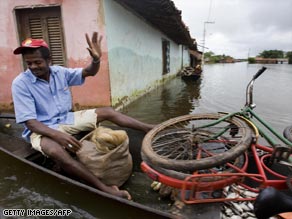 Steady rain has flooded communities across 10 states in Brazil since early April.

The break occurred late Wednesday afternoon and was blamed on heavy rains in the state of Ceara, the state-run Agencia Brasil reported. Concern over the dam's integrity led officials to order residents to evacuate Cocal for 15 days. But they were allowed to return this week after the dam was deemed safe, it said.

Fire officials said 800 to 2,000 homes located near the dam were inundated, but civil defense officials estimated 500 families -- some 2,500 people -- were affected.

Steady rain has flooded communities across 10 states since early April, killing dozens of people and forcing nearly 800,000 from their homes, according to the Brazilian civil defense agency.